Invest in T Bills or Tea? 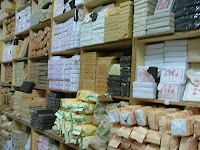 BEIJING Five years ago, Yang Chunyan had never tasted pu'er tea. But after just one sip of the smooth, dark brew, the Beijing native was hooked. Now, Yang has opened the Aromatic Pu'er Tea House, a tiny shop located on Gulou Dong Dajie, a busy street in the center of town. "Lots of people are interested," she said. "In Beijing, pu'er tea is starting to become a trend."

Although tea drinking has been part of Chinese culture for 3,000 years, the capital's connoisseurs have only recently developed a craze for pu'er, a special aged tea indigenous to Yunnan Province in the southwest. Like vintage wine, pu'er, which is stored in compressed cakes, mellows over time, and its value appreciates. In China's supercharged economy, where no investment opportunity goes unnoticed, pu'er's popularity has sparked a wave of collectors, many of whom see the tea as a worthy speculation.

"Tea never goes bad, so it's a good investment," said Ji Xiaofeng, who manages a stall at Maliandao, Beijing's wholesale tea market. Last year, 500 grams of tea, or about 17 ½ ounces, preserved since the 1940s sold at auction for 1 million yuan, or about $125,000, he said. More modest investors can expect new tea, which sells for about 2,000 yuan per kilo, to double in value in five years.

"If you invest in the stock market, you might lose every penny. But if you invest in pu'er, it will only go up," Yang Chang, a pu'er tea collector based in Kunming, the capital of Yunnan Province, said in a telephone interview. "This is a good, low-risk way to earn money."

Prized for its earthy, rich flavor, pu'er is a large-leafed tea gathered from centuries-old trees that thrive in Yunnan Province's changeable climate and acidic soil. After the leaves are harvested, they undergo a traditional process of compression and fermentation, which brings out the tea's particular qualities. "It has a special mildewy scent," said Shi Zongkai, a Tsinghua University professor and pu'er tea enthusiast. Some believe this mildew, which accumulates as the tea ferments, has unique health benefits, including weight loss, he added.

His studies examine the effects pu'er may have on lowering cholesterol and preventing cancer. "This is my life's work," he said. Yang said these perceived medicinal qualities have contributed to pu'er's recent increased popularity. Pu'er has long been celebrated as a folk remedy, he said, adding, "Now, people care more about their health than ever before."

Though pu'er tea collectors abound in southern China, particularly Hong Kong, Taiwan and Yunnan, tea companies have only recently started to promote their product to northern Chinese consumers. Four years ago, the Yunnan provincial government sponsored a pu'er advertising campaign in the capital to promote the brew's health benefits.

Last year, Zhang Guoli, a popular Chinese actor and director, arranged for a horse caravan to travel a historic route from Yunnan to Beijing, while carrying a precious load of tea. The arduous six-month journey, which gave the tea time to ferment in the traditional manner, was widely covered in the local media. "It really introduced pu'er tea to most Beijingers," said Yang Chunyan, the tea house owner.

In another neighborhood, Yang Chunyan's pu'er tea shop has seen a small but steady flow of customers since it opened in April, and she is confident that people are becoming more interested in her product. "Southerners have collected pu'er for 20, 30 years, but many northerners still don't understand it," she said. She offers tea tastings to novice enthusiasts, educating them on the characteristics of fine leaves. "Pu'er is a drinkable antique," she said. "I love the culture of this tea, and I am thrilled to introduce it to others."

Shi, who discovered pu'er during a two-year stint working in Yunnan Province, enjoys comparing tea from different years of production. "Pu'er from the '70s, '80s, '90s, they all taste different," he said. "It's like comparing wines from France, California, Australia."

Yang Chunyan is one connoisseur who does not collect the tea, despite her passion for it. "I just like the taste," she said. "Collecting it is too expensive."

From his stall at the wholesale tea market, Ji Xiaofeng said that pu'er prices have skyrocketed in recent years. "If you have money, you can participate in the auctions," he said. "But recently, it's been more difficult to find aged tea, and there have been fewer pu'er auctions."

Yang Chunyan agreed. "Auctions are very scarce these days," she said. "And the people who participate are rarely pu'er experts. I don't even know if they drink the tea."

For some, however, aged pu'er is not the best. Yang Chang, who is known as a pu'er expert, prefers young tea - about two or three years old - as it is "the best for your health," he said. "Tea that is 20, 30, 40 years old has lost all of its valuable elements," he added. "Besides, it's becoming too hard to find."

In fact, the recent demand for aged pu'er has led to an increase in fake tea - pirated pu'er - that some purveyors try to pass off as vintage. Tea producers have developed a way to accelerate the fermentation process, which results in a weak-flavored brew, Shi said. "Most people prefer naturally fermented tea, and the prices reflect this,' he said.

It is a combination of flavor and culture that keeps pu'er lovers brewing fresh pots of tea. "I like the taste, the health benefits, the cultural experience of drinking it," Shi said. "When I make a cup of pu'er, it reminds me of my time in Yunnan Province. I can taste the history of the tea, the age of it. This experience is not possible with any other kind of tea."


By Ann Mah International Herald Tribune
'The rewards of a 'drinkable antique'
at February 20, 2007