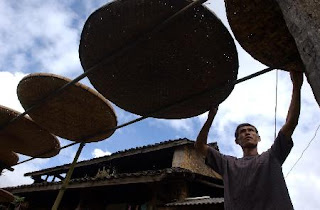 If microbrews taste better than mass-produced beers, then logic should dictate that a "micropuerh" would taste better than a mass produced product? Right? This of course is not to suggest that there aren’t any fantastic mass-produced pu-erhs on the market. THERE ARE, of which I own many. But what if you can really measure quality, taste, and storage potential by how many hands have touched the leaf, even before you have sampled it. I don't know, maybe it is all in my head, Or is it? Hummm?

It has been suggested that the YiWu mountain of Yunnan produces the best pu-erh that Xishuangbanna has to offer. But why is YiWu pu-erh so coveted among pu-erh collectors and connoisseurs? Is it the quality of the wild ancient arbor trees? Or are the people and their methods responsible? Of course great leaves will produce great pu-erh, but what of methods? It has been my experience that some pu-erh vendors generally tend not emphasize a tea's production method, but rather stress leaf grade. - Probably for good reasons. Today, many pu-erh factories are just that-factories. Some have become very automated and bureaucratic in their productions where machines have replaced the opposable thumb. This is not to say that vendors at times will not advertise a pu-erh as "sun dried" or "stone pressed", but when they do, chances would be that it is a product of YiWu.


On YiWu, tea is life; literally! Most families in YiWu are in some fashion involved in the tea business. A business that has been resistant to modern processes, and in fact prefer to only utilize the methods of their fore fathers and mothers. However, understanding the increasing demand for pu-erh in China and in the West, things could unfortunately change. The government of Xishuangbanna is currently putting pressure on these families to exchange their traditional methods for ones that can meet the demands of the market. Nevertheless, as of now, YiWu pu-erh is a truly crafted product where the people are intimately involved in every part of the process. 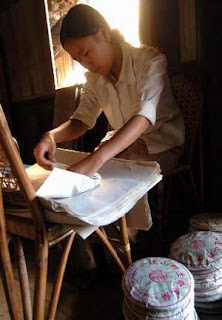 Thanks for blogging. I have certainly enjoyed your posts and look forward to more.