What I wish I knew when I started Collecting? 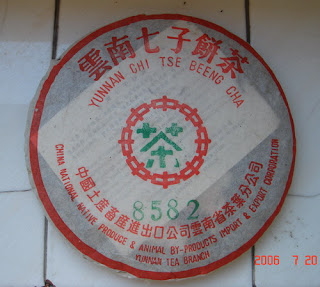 The ageing poten-tial of pu-erh tea is a topic that is often discussed among Pu-erh collectors. With the invested time it takes to age pu-erh, collectors undoubtedly want to invest in products which will provide a great return, both in flavor and in value. However, there are no easy formulas that collectors can employ which will simplify this task. For the most part, collectors have to rely on their taste and past successes to select a potential aging pu-erh candidate, and for some who are just starting out on their pu-erh collecting journey, their first foray into collecting can create much confusion and anxiety. With terms such as leaf grade, recipe codes, factory codes, sheng, shou, it is enough to make any novice’s head spin.

In the past, pu-erh was considered a "regular" commodity, and was meant to be drunk and enjoyed as part of daily life. The concept of pu-erh collecting did not start until much later. As a result, most early Hao (factories) had access to the finest leaves since the demand for pu-erh was not there. Interestingly however, we currently do not know what types of leaves were used in the early commercial production of pu-erh.

After the Chinese Revolution and its subsequent planned economy, the Chinese Government had only allowed the use of plantation leaves for pu-erh production. As a result, the use of wild arbor leaves for pu-erh production was very uncommon. However, in the late ‘90s when the China National Native Produce and Animal By-Products Import and Export Corporation (CNNP), recognized a domestic surge in the demand for pu-erh tea, the CNNP felt it prudent to relax its tea ingredient directive allowing pu-erh manufactures to incorporate other materials into their stocks other than the sanctioned plantations leaves.

Currently, there is a trend for pu-erh factories to use wild arbor leaves in their productions. However, what concerns a number of pu-erh collectors is the uncertainty associated with using such leaves. As of now it is not known whether wild arbor leaves have the capacity for aging. Of course this is not to suggest that there aren’t any current prospects which are showing great aging potential; in fact there are many! Nonetheless, it is still not known if they can successfully reach the age of that of their predecessors. We can only wait and see.

Another interesting development in pu-erh production is the increasing practice of factories producing pu-erh entirely made of silver buds leaves. When it comes to pu-erh, "white pu-erh" is a totally foreign concept that had its inception around 5 or 6 years ago. However, as in the case of wild arbor leaves, its aging potential is yet to be determined. What is certain is that this practice has created two very opposing and different opinions. Some argue that silver bud pu-erhs are not well suited for long term ageing; suggesting that white pu-erh will lack in flavor and complexity to fully age. Others will suggest that silver bud pu-erh will age just fine, and its delicate flavors can mature. Of course the jury is still out, and IMHO, I am quite skeptical that it will have the necessary ingredients to fully reach maturity with the complexity needed to be a great pu-erh. Nonetheless, you can find them cheap so why not get a few ;)

What of leaf grade?

Leaf grade should be a no brainier when it comes to the potential for aging right? All you have to remember is that the lower the grade the better the pu-erh. Right? WRONG!

There are currently 10 leaf grades with the lower numbers representing finer, younger leaves while the higher numbers represent leaves which are older and less tender. For the most part, factories will blend different grades from different areas to produce a nice tasting pu-erh. The concept is no different than when Lipton blends teas to produce a consistent flavor. Leaf grade should only be used as a guide for selecting pu-erhs. A person would be selling themselves terribly short if they only decided to buy pu-erh strictly according to leaf grade. 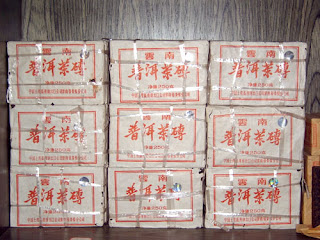 There are a number of pu-erhs on the market which are made of higher grade leaves that are currently prized and sought after by collectors. For example, the MengHai’s 7572 , 8582 and 8592 are now showing great promise making these recipes a must have for any collection. In addition, the 7562 and the 7581 (ripe) brick teas from the MengHai and the KunMing factories are consistently getting better with age and are now commanding a hefty price for older examples.

What is so special about the year 2004? Well, many pu-erh collectors will suggest that 2004 was the turning point for pu-erh - unfortunately for the bad. Before 2004, pu-erh was still relatively enjoyed only by the inhabitants of Tibet and Yunnan China and did not have the world appeal as it does today. I mean think about it, I’m sitting here in Minnesota writing about pu-erh!

Before 2004 the majority of pu-erh factories still had the capability of producing pu-erh made of the highest quality ingredients with ease. However, as result of pu-erh’s new popularity, factories have to, well to use a bad drug analogy, they have to “cut” their recipes in order to produce the quantity needed to meet the demand. As a result, some collectors will suggest that pu-erh made after 2004 will not be of the caliber to that of previous years. I have to do a bit more research on the veracity of these claims and will post my findings on future post.

Confused Yet? Well don’t be.

The only thing you can really do is learn from peoples' past mistakes. Pu-erh collecting is not a hobby where making mistakes can be considered a learning experience. Waiting 10 years to find out that your beeng or tuocha is not developing is definitely a big waste of resources. This is not to suggest that you shouldn’t buy a particular product for the fear of buying something not worth aging; to the contrary. What I am saying is - buy wisely. Here are a few tips which I have learned from collectors that I currently use to buy:

1. Do your research. You need to ask yourself some very specific questions when you buy. Find out what a factory has to offer in quality. Do they have examples of past successes? Have they won any awards for their efforts? Is their any buzz comming out of Yunnan and HongKong that is making a buzz? What are tea merchants saying about a particular product? Where were the leaves harvests? When were the leaves harvested? Remember some areas are more famous than others for a reason.

2. Buy time proven recipes. Usually, but not always factories will use a code to inform the consumer which blend they are buying. Recipes like 7432 7532 7581 and so forth have been around for thirty years or so. What should this tell you? It should tell you that the recipe is consistent and worth buying or the factories would have stopped producing it.

3. Test the product – Try to obtain a sample of a product that you are exploring and ask yourself: Does it taste good? Is it really swampy or fishy? Does it have a nice bitterness? Did the color, taste and aroma become weaker after only a few infusions?

In summary, I would like to say that collecting is a great joy and it is not meant to stress you out! When you become frustrated,
~ Just remember that its just tea~

Well, maybe puerh isn't "just tea," since so many otherwise reasonable people have become obsessed with it!

Thanks again for reading Salsero. Not obsessed here just a hobby! I still first strive for world peace ;)

Very interesting. I've been trying to figure out how to pick out some 'classic recipies' as it were. This definitely helps a bit.

I've been meaning to ask, where do you buy most of your puerh?

Hey all, thanks for reading. You guys really keep me inspired to keep posting! Hey Lenny, you never informed me how the 1994 MengHai went.