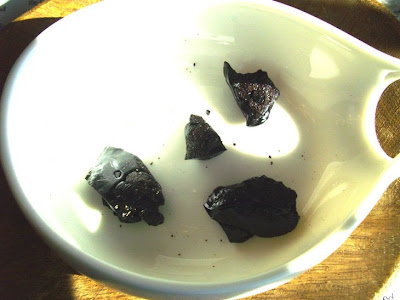 That is right, pu-erh concentrate. A gent named Coloradopu who I chat with on occasions on Tea Chat was nice enough to send me a few nuggets of this curiosity. Frankly, I do not know much about this concoction other than it is supposedly sheng which has gone through quite a bit of processing resulting in what you see here. The pieces resemble a Jolly Rancher in consistency but considerably more brittle. They give off a faint caramelized odor which really makes it seem more like candy than something that you would infuse to imbibe.

I was warned by Coloradopu to use only a small bit as it is very concentrated. I decided on a piece the size of an eraser end to start. Not wanting to risk of contaminating my Yixing ware, I figured a Gaiwan would serve my purpose. 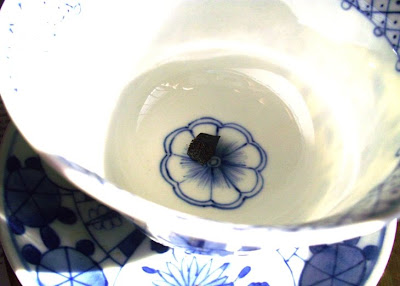 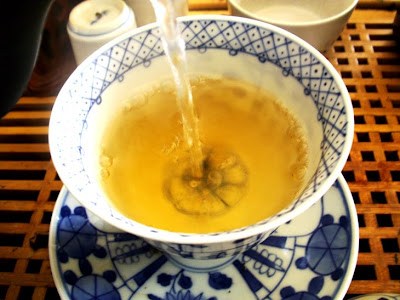 Almost instantaneously the nugget started to infuse into the water as you can see. Actually looked quite nice. 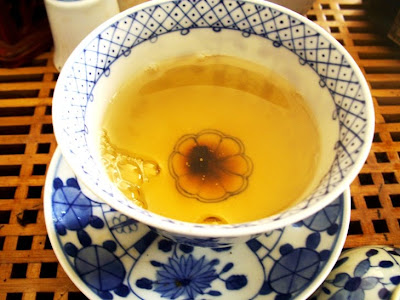 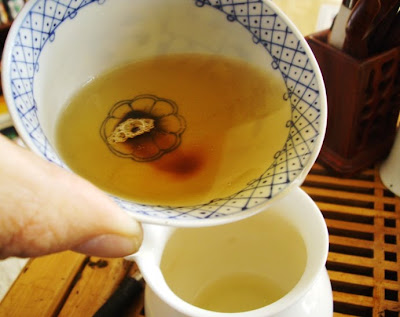 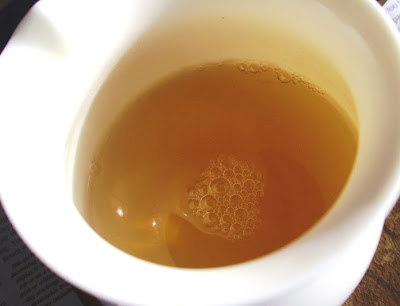 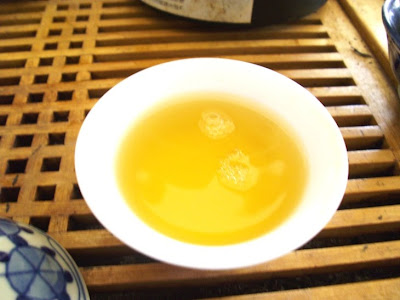 Well, it looks like sheng, but unfortunately that is where the resemblance stops. I was not putting too much hope in this product, after all anything instant sux. Honestly, its not a bad tea. It almost tastes like sheng which has been overly roasted (which I have done on occasion). The liquor has no astringency or bitterness. It is not nuanced but straightforward. The liquor itself doesn't give off much of an aroma. However, there is a definite sweet, roast smell wafting up from the fair cup. It almost smells like a yan cha. There is really nothing great about this tea other than its novelty. I guess if you are traveling and do not have any time to stop for a steep or don't want customs examining your bags wondering what this green stuff is in your carry-on, I guess it may serve a purpose. :D

I actually was able to steep this nugget 6 times before it completely dissolved. 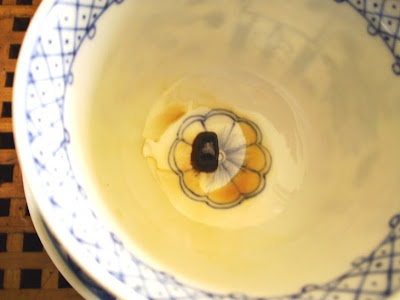 Thanks ColoradoPu for being so generous! Btw, stay tuned for the Cha Gel SHUPU Concentrate which he was also kind enough to send! :D
at August 18, 2009

Experimented with this concentrated tea a few years ago.

No matter how it was brewed it always tasted overcooked, just as you mentioned.

They use pressure and heat to extract it from the puerh leaves.

I guess I'd like to try this stuff. Like a Yan Cha? How does it compare to a bamboo-roasted Pu-erh? --Spirituality of Tea

Hi Jason, I think that comparing the gel concentrate to roasted puerh is not that helpful since they are both completely differnt. Any similarity would be of course its roasted flavors. I agree, I think you should try some. :D

glad it was not a complete train wreck for you. I think your description was fare and accurate but as most would say it is the persons pref. i like the stuff on occasion and think a back to back comparison to the shu would help you understand the category cha gau.
glad you kind of liked it.

I haven't had chance to try this gel stuff. But, some friend gave me something maybe translated as "cha head," which is a result of processing large amount of shu puerh during which time some leaves packed too tight so they form a lump! Have you had that before?

Hey, I love your blog. I am addicted to tea!

Right now if you go to http://www.BluePeopleTea.com we are giving away FREE TEA!*


We bumped into your blog and we really liked it.
We would like to add it to the Petitchef.com.

We would be delighted if you could add your blog to Petitchef so that our users can, as us,
enjoy your recipes.

Petitchef is a french based Cooking recipes Portal. Several hundred Blogs are already members
and benefit from their exposure on Petitchef.com.

To add your site to the Petitchef family you can use http://en.petitchef.com/?obj=front&action=site_ajout_form or just go to Petitchef.com and click on "Add your site"

As a matter of fact, not many people know how to prepare cha gao the right way. Back then in tang dynasty cha gao was frothed up, before drinking. I recommend you guys trying it a second time, by just using about the amount from a tip of a knife, and then you have to get it into a very fine powder(preferably mortar&pestle) Add 100 degree celcius water and then whisk it with a chasen, until nearly fully dissolved. Enjoy :)