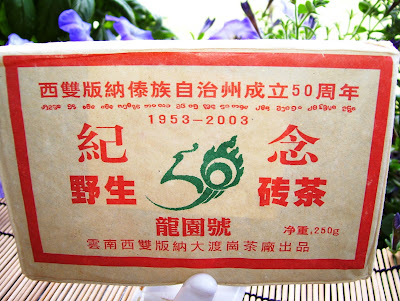 To commemorate the 50th Anniversary of the establishment of Dai Autonomous State in Xishuangbanna, the People's State Government had commissioned the Da-Du-Gang Long-Yuan Tea Factory to produce these fine bricks in order to celebrate the states inception.

The brick was produced in 2003 utilizing spring handpicked arbor-type leaves from wild ancient tea trees in Xishuangbanna. The wild arbor trees which were plucked were all 100~500 years old. The raw leaves were sun dried following traditional methods and were not machine-dried. 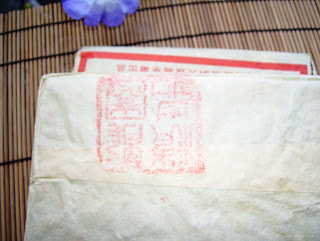 The back of the wrapping paper is sealed "Long Yuan Jin Pin" (Long Yuan Superior Grade). 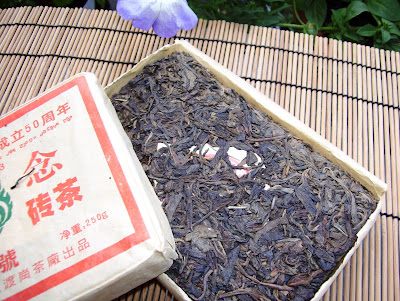 The brick appears that it has aged some since the last time I have sampled it. There was a pungent odor when it was initially inspected sometime back, however, it seems that this is no longer the case, but has been replaced with a slightly floral aroma. 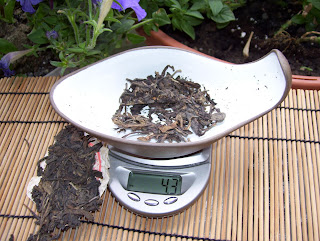 Taste - No taste of smoke; no bitterness; very slight hints of butterscotch and a flutter of grass.

Aroma - More wood notes, however, still very slight in comparison to other arbors. Still very sweet; the butterscotch is still lingering in the background; grass has waned; now melon and floral notes are coming through. 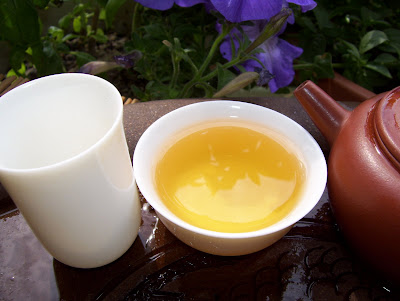 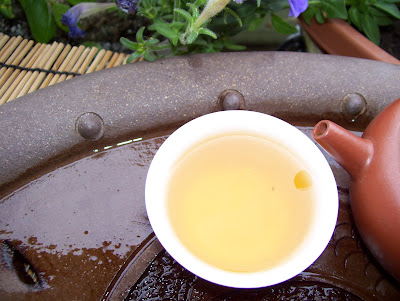 As you can see, th liquor has turned a nice amber. The color stayed quite consistant-a good sign. 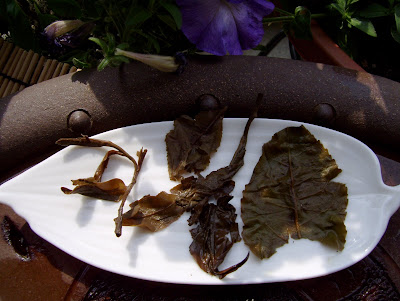 Although the prescription for this brick calls for spring arbor mao cha, in my opinion, it appears that there might be a few fall harvest leaves thrown into the mix. Nonetheless, from the intact leaves that I was able to locate, along with its arbor tasting palate, I believe it's safe to assume that it's wild arbor.

This brick is aging quite well and is exceptionally mellow. It does appear that they were made of high grade materials as the stamp on the back of the wrapper implies. However, this stands to reason since high grade mao cha did not become scarce and/or expensive until roughly 2004.

It is a really smooth and quenching drink that will undoubtedly age very well. It was hard to gauge whether the prescription was entirely made of wild ancient arbor, however, its characteristics do suggest that it is. In my humble opinion, I believe that the bricks can be drunk now.
at July 13, 2007

I'd love to get some of this. Where did you get it?

Hey Space, I actually bought the first two bricks from HouDe. However, I subsequently found a couple more from a vendor in China, although I don't believe they are in business anymore. If you would like I can try to locate this item for. I don't think they are extremely rare but might take some effort to locate.