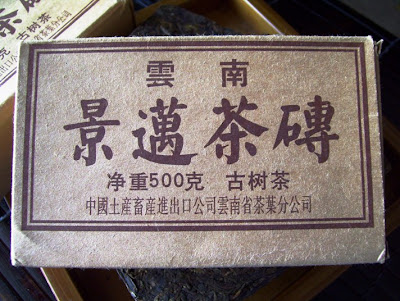 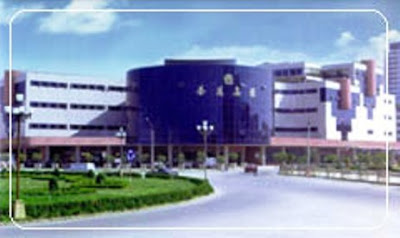 The China Tuhsu Yunnan Tea Import & Export Corporation was established in June of 1938 in KunMing. Under the leadership of Geng Shang Rong, and the oversight of the CNNP (China National Native Produce and Animal By-products Imp. & Exp. Corp.) the company produces a variety of products which includes black teas, instant teas, green teas, and tisanes.

With an annual income of over a 1,000,000 USD and just under 1,000 employess, the corporation is a far cry from their humble beginnings. Now, mind you, this is not a tea factory per se; they contract tea farmers to produce teas for export and are quite successful with annual export rate is over 60%.


Despite the grandiose description of their corporation, they can still produce quality and at times rarer stock - this particular brick is one of them.

According to the description ticket, these bricks were produced of Spring first flush broad arbor leaves from ancient trees of least 1000 years old. 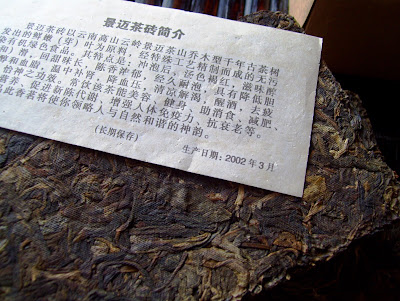 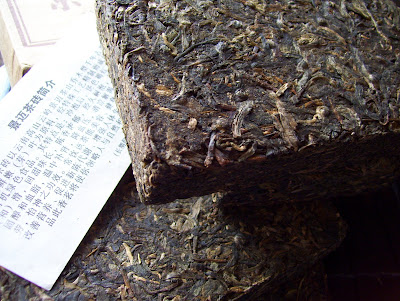 Though the bricks have been aging now for 7 years, you could smell a smoke odor emanating from their quintessential CNNP boxes - Not a problem. Some don't like the smoke aromas and I can only tolerate so much, but sometimes it is a nice change of pace. Please do not consider smoke a negative. Although smoke can be considered a production defect, it is still considerably acceptable.

Definitely machine pressed as you can see the 'nails' or the bumps left from pressing on the surface of the brick.

The bricks appear to have been stored in my opinion much drier climate as the colors of the bricks do not correspond to the age. I would at least think 7 years of aging would have presented more of a brownish hue. Nonetheless, the proof is in the taste. 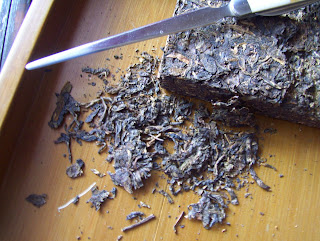 The aroma was very pungent. Fortunately,the smoke was not as heavy in the dry. I believe that 2 rinses before the infusion removed most of the peaty notes. There were really no floral notes to speak of. For the most part, the aromas were more grassy and less sweet. I found additional notes of grain, tobacco and what can only be characterized as raw potatoes. The latter infusions were somewhat less straight forward. Sometime after the 4th, the aromas began to exhibit its greenness. 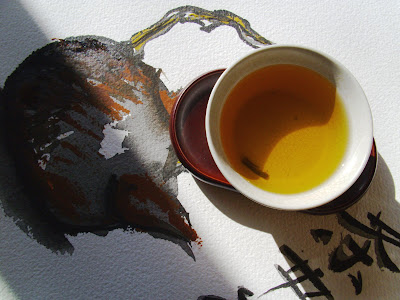 The liquor certainly did grab my attention right away as it had grabbed every taste bud with vengeance - though not in a distasteful way. In fact, to the contrary. However, you definitely knew that you were not drinking a dainty brew. The profile was very masculine with its variable notes of smoke, leather and grain. The latter infusion became more subdued, yet still very aggressive. The woody and grain notes began to transition more into what you would find in a more youthful pu and became more oceanic - Very rustic indeed. The liquor had a tantalizing acidity and viscosity which could be felt as the liquor made its way to the back of the throat. The chayun was relentless and remained so throughout the session. The Chaqi was wonderful and quite numbing -almost tranquilizing. 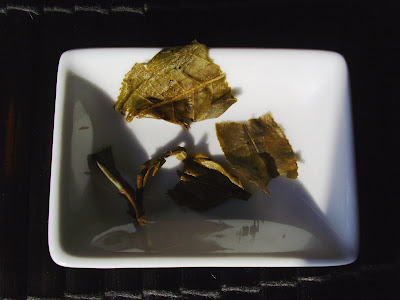 The spent leaves were remarkable. They had a course quality that when manipulated with my fingertips, they had maintained most of their integrity. The leaves were thick and bold with a seemingly wild character.

Its power suggests that it is definitely something to store. It is one of those teas that grabs you by the shirt and throws you across the room. The flavors, sensations and chaqi were all quite pleasing albeit much too rustic to enjoy now.
at April 02, 2009

Don't knock that cup over :)

Oh, it's definitely a seatbelt type of tea.