This is the second part of my excursion into the unknown pu-erhs that were sent to me. Needless to say, they were again labeled with an alphabet letter. Here are my notes and identification guesses. 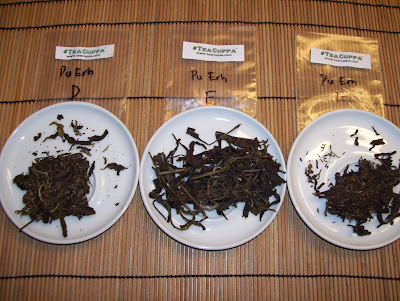 I have a few beengs of CNNP KunMing Factory Blue Mark, and I was hoping it would taste the same. However, there was no resemblance.

Aroma - The aroma was fair. It had thin floral-honey notes, which were wrapped in hay and cooked pumpkin.

Taste - The taste was slightly floral, heavy metallic notes with a slightly pond finish. It lacks acidity with virtually no awakening of the taste buds. It did have a nice viscosity however. 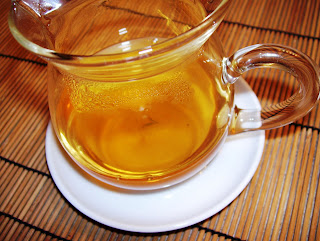 Color - It had a pleasant hue, but unfortunately not very clear.


Overall Impression - I did not enjoy this sample. I did like the aroma some, however, it lacked in impact and was a bit too brassy for me with its unclean after taste.

The leaves were a longer and thin than that of the other 2. I have personally never heard of this particular pu-erh, (assuming I am guessing correctly), however the leaves do resemble a few that I have tasted before.

Aroma - It's aroma was somewhat flimsy with a light airy floral note, wrapped in pronounced oxidation and grass.

Taste - The taste was not very inviting. It had a pungent mushroom taste with little to no acidity. Quite bland actually. However, it subsequent brews were a bit more tolerable.

Liquor - Was lightly cloudy at first but cleared in subsequent infusions. 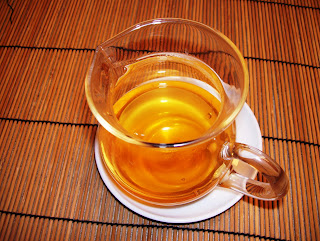 Liquor - It's liquor was cleaner than Sample E.

Overall Impression - It was was tolerable and better than the previous sample. I would not recommend this beeng as IMHO there are many better quality beengs out on the market.

My first initial impression was that it looked like a slightly aged example. Perhaps, 3-4 years old. I couldn't be certain as I did not have the wrapping.

Aroma - It had pleasant hints of hay, honey, and fruit. Ocassionally, I would take in a slight pond.

Taste - Nice balance between the sweetness and bitterness. Slight vegetal with a fickle hint of fruit. It had a nice lingering after taste with a nice viscosity. Descent.

Liquor - Finally a clear example. It was a nice gold with a slightly aged ting. 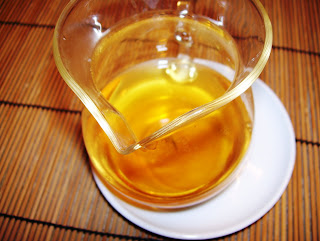 Overall Impression - I did like this beeng. I believe that it has potential as the indicators were there. Nice.

Conclusion - It was a nice tasting contest. I had fun! Unfortunately, the samples, for the most, part were not very exciting. In general, I felt that they were inferior, although the samlple that I identified as (f) was promising. I would not personally spend money on these as there are many 2nd tier manufactures that would run circles around these.
at May 31, 2007 1 comment:

A few weeks ago, I was confronted via e-mail with a proposition by David of the now well-known tea blog Half Dipper to participate in a pu-erh blind taste contest sponsered by TEACUPPA tea vendors. Being the tea admirer that I am, I humbly agreed. The samples arrived direct from Frankfurt Germany byway of China. As you can see there are 6 individual samples, where each are assigned a letter; 3 shupu(s) and 3 sheng(s). Luckily, TEACUPPA, the organizer of this global tasting event, (I do mean global as there are 10 others from around the world whom also have been tapped to participate) has included the names of the of each sample: 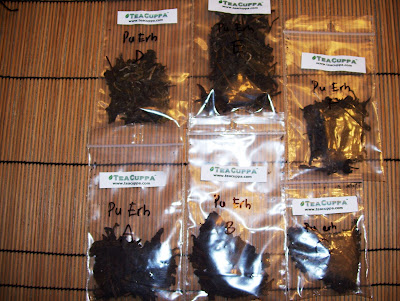 My objective is to decide which pu went with which type and give my opinions for each. Of course I had no methodology to this maddens, so I have decided to proceed in alphabetical order. Samples (A) (B) (C) were obviously the 3 shupu(s) and the remaining where the Sheng(s). Below is my accounts of the shupu(s). 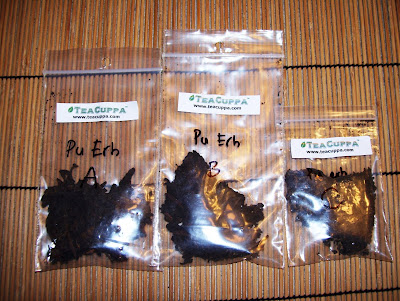 Sample (A) Identified as Organic Luxi 8821

Tasting Notes -- There was really nothing out of the ordinary when I first examined this shu. It did not have a pungent dry smell as some younger shu(s), and was quite gray looking IMHO.


Taste - Virtually no layers of complexity. In fact, it was quite light an airy with a woody greeness to it. It's body was flimsy with a shallow aftertaste. Almost like a semi-ripe shu. 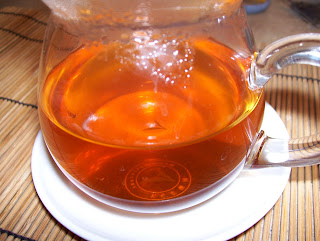 This sample looked more like shu than sample A. It's dry leaf smelled faintly of molasses.

Aroma - Its aroma had undertones of dried wood, slight floral cooling notes, and a heavy presence of pecan nuts of which I enjoyed. 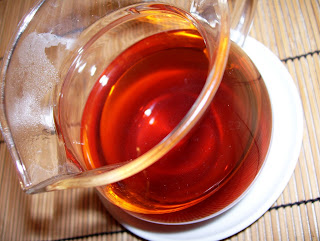 Taste - The liquor did have a nice viscosity, and was quite smooth. It had a soft touch of spice, and celery seed, which were wrapped in pecan. Unfortunately, none of these were lingering.

Liquor - The liquor was darker than sample A.

Overall Impression - It was a bit better that sample A, however, I would not waste my time drinking this particular example.

The sample was a bit more dense than the previous 2. It also appeared that it was made of a higher grade mao cha as the leaves were considerably smaller.

Aroma - The aroma was light with fickle hints of melon, wood and currants.

Taste - The taste was somewhat surprising, unfortunately in a bad way. I have tasted MengHai Tiadiren before, however on this particular occasion, it was not the same (assuming it is the MengHai). The first thing I had noticed was this overwhelming sourness which was wrapped in a woody note with nothing more. Simply unpalatable.

Liquor - The liquor was beautifully clear and amber. Unfortunately, this was its high point. 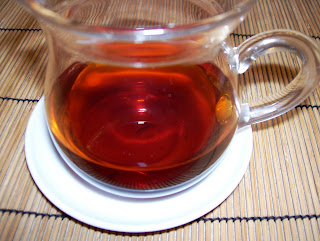 Overall Impression - Just a huge disappointment. IMHO, age will not better this example.

I am just glad that the shupu samples were free. I really didn't care for any of them. However, If I had to choose one, it would be sample (B). It was more consistent with the other shupu(s) of my liking and did have its moments.

They gave no indication as to when the results will be posted. However, as soon as I am aware, I will post them. Wish me luck!

Well, I am working on a couple of reviews, however, finals week is taking up most of my time. But rest assure they will be posted soon. I just finished a gongfu session and had noticed that the sunlight was comming through my patio doors and decided to take a couple of pics and see how much sunlight really hightens a shot. I noticed that Tea Logic and a few others use the sun quite often to make their pictures look beautiful. Well, here is my effort. I know i'm not a pro, but I thought they looked cool and decided to share them with you. Notice how the sun made my cup of shupu a burnt orange. Lovely! 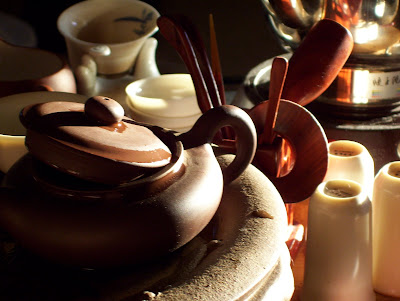 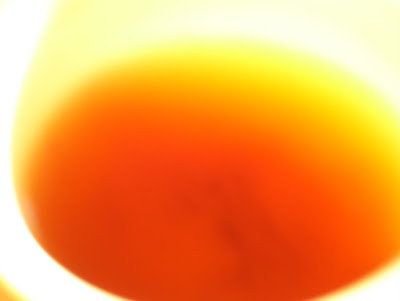 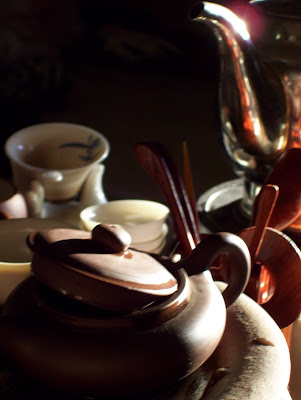 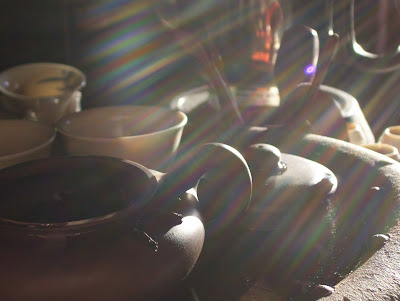 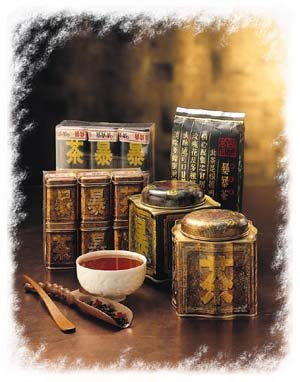 People who unwind with a cup of tea every night may have a lower risk of two common forms of skin cancer, new research suggests.

In a study of nearly 2,200 adults, researchers found that tea drinkers had a lower risk of developing squamous cell or basal cell carcinoma, the two most common forms of skin cancer.

Men and women who had ever been regular tea drinkers -- having one or more cups a day -- were 20 percent to 30 percent less likely to develop the cancers than those who didn't drink tea.

The effect was even stronger among study participants who'd been tea fans for decades, as well as those who regularly had at least two cups a day, according to findings published in the Journal of the American Academy of Dermatology.

However, the findings do not mean it's okay to bake in the sun as long as you have a cup of tea afterward. The researchers found no evidence that tea drinking lowered skin cancer risk in people who'd accumulated painful sunburns in the past.

Nor did the study look at the relationship between tea drinking and malignant melanoma, the least common but most deadly form of skin cancer.

Still, the findings support the theory that tea antioxidants may limit the damage UV radiation inflicts on the skin, according to the study authors, led by Dr. Judy R. Rees of Dartmouth Medical School in Lebanon, New Hampshire.

In particular, a tea antioxidant known as EGCG has been shown to reduce burning on UV-exposed skin.

The current findings are based on interviews with 770 New Hampshire residents with basal cell carcinoma, 696 with squamous cell carcinoma, and 715 cancer-free men and women the same age.

Tea consumption was linked to a lower skin cancer risk, even with factors such as age, skin type and history of severe burns considered. However, tea drinkers who'd suffered multiple painful burns in the past did not have a lower risk of skin cancer.

It's possible, the researchers explain, that the antioxidants in tea are enough to limit skin damage caused by moderate sun exposure, but not the more extreme effects of sun exposure, such as cancer-promoting damage to the DNA in skin cells.