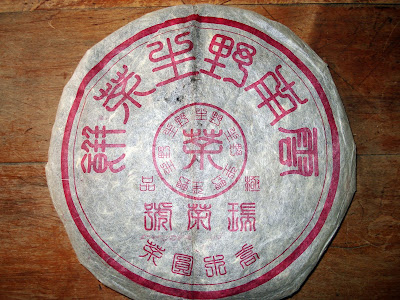 This 2003 is an offering from Sampan Teas . I was excited to try this tea since I have a great affinity for Big Snow Mountain puerhs. Though Da Xue Shan teas are not as sought after as other famous mountains, they always seem to agree with with me. They are not aggressive and more often than not I feel I can drink them earlier than most others.

Unfortunately, I was unable to sniff out any substantial information about Rui Rong Hao factory through my detective work. However, if you will allow me to conjecture, my assumption is that Rui Rong Hao may be a subsidiary of the Chang Tai Factory from the looks of its wrapper. Nonetheless, it looks like a quality beeng but the proof as they say is in the pudding.

The aroma from the dry leaves was very intoxicating. It had hints of dried fruit and an overture of spice. There were no notes of smoke or unpleasantness to speak of, just a genuinely refreshing odor. The leaves are slightly dark which are accented by its nice glossiness and long stems. 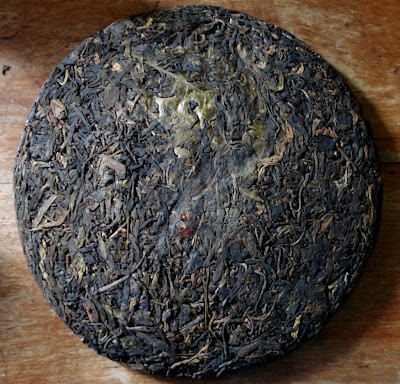 Instead of the quintessential Nei Fei "inner ticket", the factory decided in a more classy approach adding a personal signature mark pressing a large broad leaf which is said to have been plucked from a 2000 year old tea tree right into the beeng along with a silk red ribbon of which you can see slightly in the center of the beeng. As to whether the claim of a 2000 year old tree leaf is true, I am not sure. If memory serves me correctly, I believe the oldest tea tree is said to be roughly 1,700 years old.

In the first infusions, the liquor had a wonderfully long lasting musk that I enjoyed immensely. It lingered in the aroma cup relatively a much longer time than I am accustomed to making for a very aromatic session. As the aroma cup cooled, the pleasant musk transitioned into the always welcoming honey and floral notes. 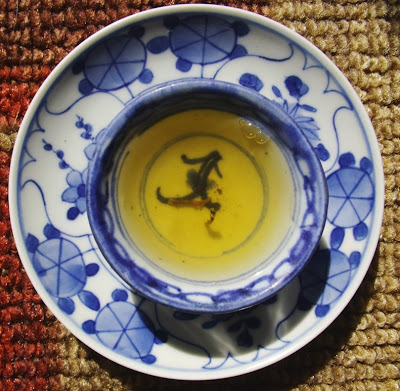 I would have assumed that the liquor would reveal sweet notes as they were apparent in the beginning infusions in the aroma, but to my amusement, the notes were quite leathery and somewhat masculine. It had a berry acidity which kept things interesting which culminated into a decent huigan. Although the liquor was not as viscus as I had hoped, the flavors nonetheless lingered on the palate.

As for the latter infusions they were very consistent with the former, although somewhere after the 5th things started change a bit. The huigan seemingly became much more apparent wjocj was coupled with a nice chayun. Interesting to say the least as it seems counter intuative.

The liquor was very clear and wonderfully bright. Although quite green for its age. Possibly as a consequence of aging in a drier than normal climate. 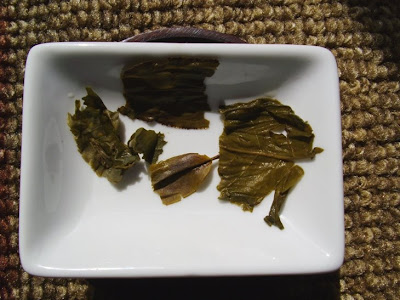 Although the claim is that it is made of wild arbor leaves, the leaves quite flimsy. Probably plantation. The leaves also seem to be of different harvest - a mixture of Fall and Spring. They are not the best looking leaves - mediocre at best. 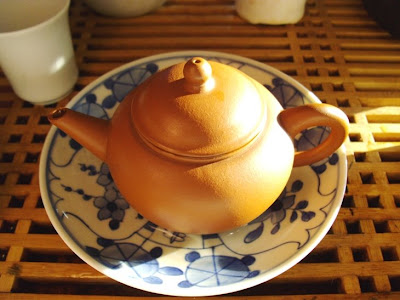 The tea provided a pleasant session. Although I question the claim of it being wild arbor, it still provided nice sensations. The cha qi was light and really didn't make much of a statement at all. The aroma was its high point followed by its clarity. I was not very enthused by its lack of maturity. Perhaps it needs to be stored in a much more suitable environment. Be that as it may, I do not think its a younger tea since many of the adolescence has dissipated. Its an honest tea which can be enjoyed now.
at June 10, 2009 7 comments: