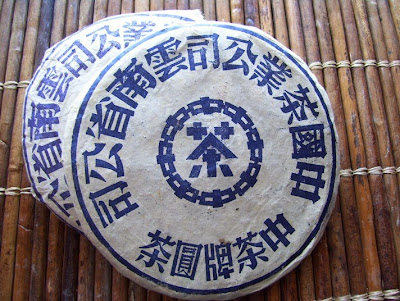 This beeng is the 2001 Blue Mark offering of the KunMing Factory. In all honesty, the information I have on this example is unfortunately scarce. What I do know is that the KunMing Factory also produced a similar beeng - the Red Mark which was highlighted in the Newborn Puerh Book 1998-2003. Nonetheless, if this is 'truly' a 2001 production, than they were made prior to the pu-erh boom so I tend to consider them special.

The wrapper design is a throw back to the Grand labels of the 50s. I find the historical significance of the large middle characters quite charming. If one notices, the Chinese character for cha "tea" being encircled by the Zhong character which represents China. When China socialized industry, China wanted to take advantage of one of its largest exports - tea. In order to symbolize China's intentions of bringing tea to the world, the China Tea Corporation had developed this now well recognized symbol of "China" zhong bringing cha "tea" to the world". Enough history :D

The beeng looks to be well stored (the last 3 years of which I did personally). There seems to be no signs of infections or rapid acceleration to speak of which eases my anxiety that this could be a knock-off. The leaves appear to be corresponding with its age - nice darkening leaves with the occasional golden tea bud scattered across the surface. The nei fei or the beeng ticket seemingly appears to have absorbed some tea oil - also apparent on the outer and inner wrapper. Depending to whom you speak with, it is at times taken as good sign of mao cha quality. 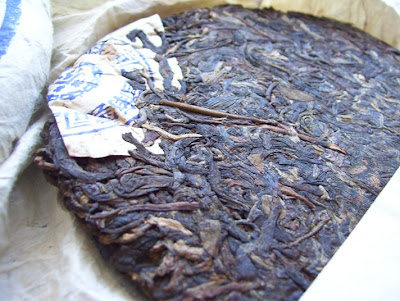 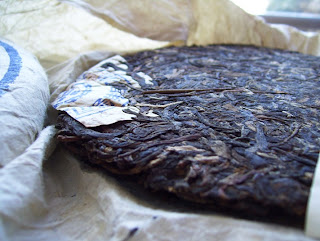 The leaf aroma is not very pungent, though you can make out a flutter of floral note, a very slight touch of smoke and woody notes. There is also no warehouse scent which you will find on occasion in older examples, although 3 years in my storage would of remedied this if it did when I bought it. For the most part, it is actually a lovely looking beeng with its full intact leaves. 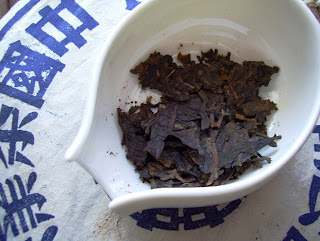 Aroma - The aromas were very in tune with what I would expect with a beeng of this age. For the most part the first few infusions emanated hits of musk, mature wood and a light hint of smoke which transitioned in to more sweet notes as the liquor cooled - very floral with notes of caramelized honey. In the latter infusions, the touch of smoke which was not all that apparent had dissipated and melon, camphor and tiny flutters of mint became more noticeable.

Taste - The taste was quite pleasant, and frankly just honestand straight forward. Although I was intrigued with its brightness, which made it a very active session. The berry like acidic quality to it which separated the notes on the palate. As for the true taste of the tea, dark notes were the theme - woody and nutty which were very consistent throughout the entire session. In the latter infusions, I could detect currents and pepper notes.

The sensations were very apparent and affected the sides of my tongue to a considerable degree. This was definitely not a flimsy tea with its wonderful viscosity. Though I must admit that I could tell by the way the tea had reacted to the sides of the cup and how it was reflecting light that it was certainly a soupy tea before I even tasted it.The huigan was somewhat of a tease, but entertaining I must say. As for the qi, it was not as apparent as I would have liked - somewhat disappointing. However, from what I could feel it was comfortable. Although I must admit that in the latter infusions I may have wiped my brow a couple of times to keep the beads of sweat from dripping into my cup. 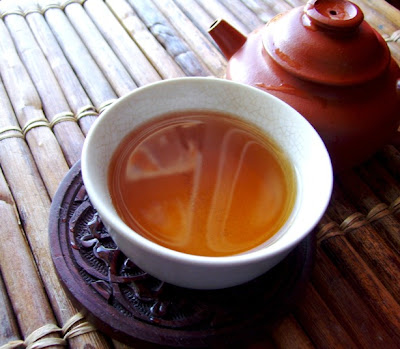 The color of the liquor exhibited its age and had a Scotch like character. It was also beautifully clear which added very much to the pleasure of the session. 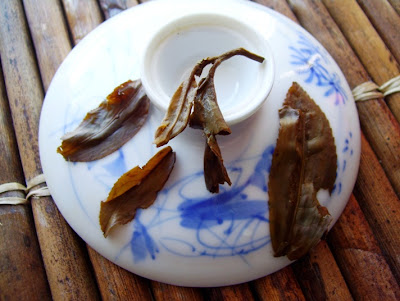 The leaves seemingly appeared healthy and of choice. I believe that perhaps the beeng is not composed of a single harvest and may even be composed of different growths, both in age i.e plantation and ancient mao cha) and in region.

For the most part, I received sensations of old growth. I feel comfortable in making this assertion in that the sensations and profile differ from other known Big Factory plantation fare I have experienced of or roughly the same age. I also noticed that some leaves have ridges while others do not. Additionally, there were also varying differences in the back ribs of the leaf which may add credence to my assumptions that a blend from different areas, and/or different growths of the same region. This of course would certainly not be uncommon for a pre-boom factory tea. In fact, single estate fare is relatively a new invention. Whether this is indicative of the aforementioned possibilities, its just an educated guess OH and I like playing detective! :P

The tea is good, albeit not as good as other pre-boom examples I have had the privilege of tasting. For the most part, the orgin of the beeng is very much a mystery. Nonetheless, something about its profile screams JingMai Shan, partly due to its nutty - meaty essence and that it does not remind me of 'large farm production fare'.

Though I am certain that a decade of aging has transformed its complexities and characteristics, it is still somewhat too adolescent (in a good way) to drink now, even occasionally in my opinion. Nonetheless, it has durability and strength and revealing promise. I guess only time will tell.
at February 26, 2009 4 comments: 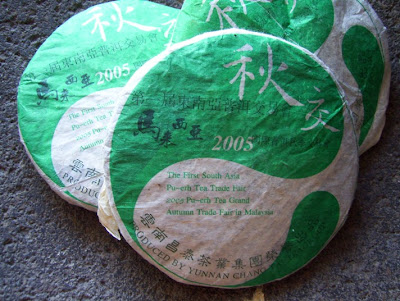 The Changtai group was commissioned to produce this beeng to commemorate the 2005 First SE Asia Pu-erh Fair that occured during the weeks of 10/28-11/6 in Malaysia. At 300g it is a medium sized cake which is composed of single estate MengHai wild big-leaf material. Impressive! It has a very luxurious feel.

The beeng itself has this dense feeling to the touch coupled with am attractive but simple yin and Yang symbol that is printed on the thin cotton fiber wrapper. My speculation is that this symbol has become the brand mark of the Fair since subsequent beengs share the same design, albeit in different colors. As some of you know, I have become quite partial to Chang Tai products since they are very consistent in production where their products are an equal trade off between quality and price. It appears that this particular beeng is no exception. 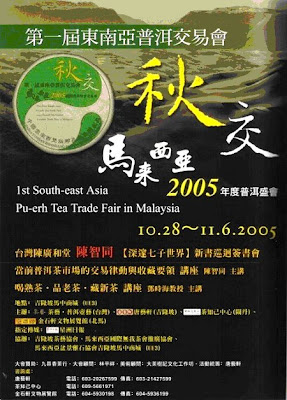 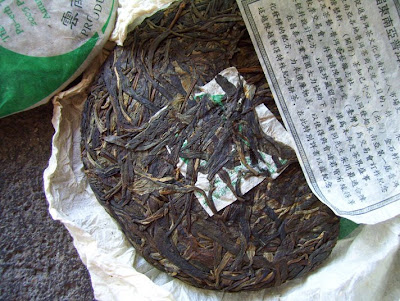 For being a 300g beeng, it feels hefty. Hard to explain unless you hold it yourself. The cotton wrapper, as previously mentioned appears to be of choice - thin, yet sturdy. Nothing more I hate when storing a beeng is ripped wrapping! The beeng does not contain the ubiquitous CNNP nei piao but an attractive custom print, and like the wrapper, also made of quality paper.

The leaves appear to be hand arraigned on the face of the cake and stoned pressed. Nice elegant touch. After 4 years of aging, the mao cha seems to be darkening a bit, yet is still providing a very fresh young scent. As you can see from the face of the cake, the leaves are long with long stems and intact. Generally, intact leaves is what you would expect for a single estate example as there is no need to masticate them for blending purposes. Additionally, they appear to be quite glossy - a good indication of quality. Definitely a departure from big factory fare. 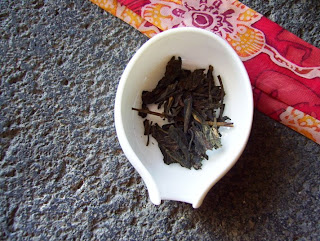 The first infusions aromas were very sweet. The notes were quite floral which transformed into dried fruit and corn silk as it cooled. There was absolutely no hits of smoke or must; very soothing and refreshing. The latter aromas were quite consistent with the first few; however I could detect a hint of citrus laced with musk, coupled with an almost berry like whiff. Indeed a nice and interesting change.

The sweetness was also the predominant theme in the first infusions. It had a very acidic quality which seemingly refreshed the palate after each cup. After the fourth infusion, you can certainly tell that you were drinking something potent. The liquor became thick with a nice silky viscosity, which consequently had caused the flavors to linger on the palate considerably. It was bitter, yet pleasing. You can say it's comparable to orange zest, not in flavor of course, but in sensation. In the latter infusions the liquor became less floral and and less sweet, and transitioned into hints of rubber, dried grass, toasted oak, and raw legumes.

It is definitely and active tea. The sensations were wonderfully apparent. Quite active on the sides of the tongue and the roof of the mouth. I was afraid that the youthful quality of the liquor would subsequently numb my palate but this did not occur. 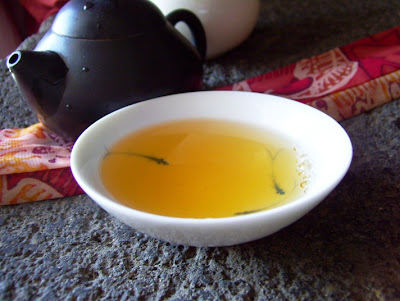 The liquor had the wonderful color of a slightly aged example. What was remarkable however was its clarity. 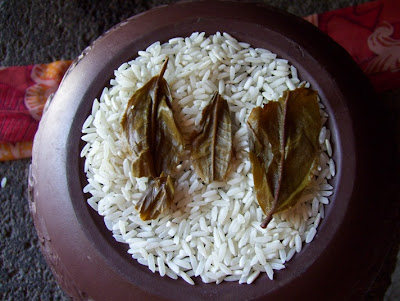 When it comes to wild big-leaf I tend to get excited when viewing the spent leaves. For the most part, I try to find ways to distinguish wild or semi-wild fare from that of plantation. However, I should preface this in suggesting that examining the leaf is a terrible way of discerning between the two. The appropriate method is to taste the leaf. A skill which I have yet to master (sighs). But I try. The leaves do have a robustness to them. JUST LOOK AT THE MIDDLE RIB! It is definitely stocky. The veins also look rustic. The underside of the leaf also exhibits a considerate amount of down. I have yet to see this in pure plantation material. Although this does not mean that plantation mao cha does not exhibit these qualities I just have yet to stumble across it. I must also note that the initially it was suggested that the beeng was made of spring material. However, I am not so sure. Some of the leaves appear to be of fall harvest so it could be a blend of seasons.

What can I say, it was a wonderfully produced item. The huigan and chayun were impeccable; the flavors were penetrating and appears to be aging nicely. Boy, for a memorial cake it sure ranks up there with the sacred cow producers' items.
at February 03, 2009 9 comments: