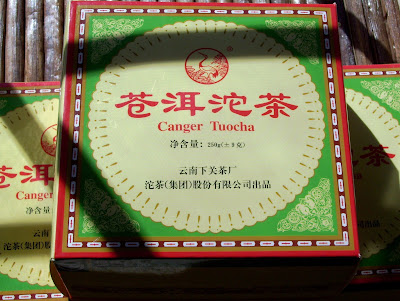 In 1959 and then again in 1979, the XiaGuan Tea Factory had produced an ultra high grade tuo to celebrate the 10th and 20th anniversaries of the establishment of the Peoples' Republic of China. The CangEr Tuocha, so cleverly named for the Cangshan mountains and the ErHai Lake that beautify Dali's landscape. This particular tuo was first specifically produced to present as gifts to visiting foreign dignitaries and as a special purchase for the Chinese people as a way to commemorate each occasion. 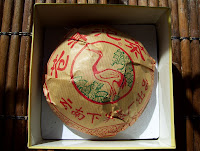 However in 2001, Mr. Kuo of the FeiTai Company which produces the XiaGuan "FT" Brand for export to Taiwan had commissioned XiaGuan to once more produce the CangEr tuo in accordance to the original 59' and 79' recipe. 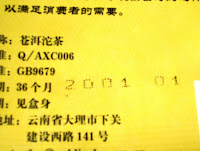 XiaGuan, noticing the popularity of the 2001 CangEr tuo decided to continue its production, however the subsequent productions years, were not ordered by Mr. Kuo.

It is said by some around the tea kettle that Mr. Kuo was a gangster member who fled to China's Mainland as a consequence of being on Taiwan's Wanted list and later founded the Fei Tai Company. 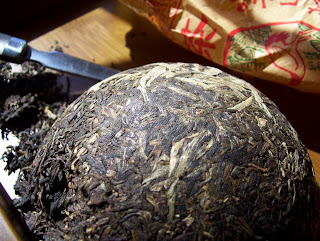 It is quite obvious that the tuo's leaves have slightly aged to some extent; the leaves give off a wonderfully strong aroma. It is very evident that silver buds are part of the recipe as they are clearly visable. 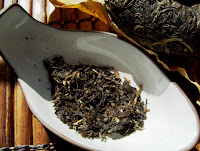 Aroma - A pronounced honey and floral aroma; their still seems to be greenness in the aroma.

Taste - Buttery with metallic notes; a lingering and crisp floral finish; not as thick as I would of suspected; there is a nice acidity that keeps the taste crisp and active palate. 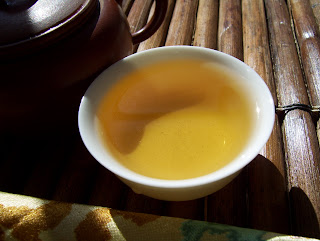 Aroma - The second infusion still has the same notes as the previous, however, the notes appear to be a bit more spicy. It is hard to peg exactly what is emanating from my sniffer cup other than a savory scent. Quite interesting.

Taste - The liquor has become somewhat sweet with a slight hint of tobacco this time; the bitterness seems to be diminishing, however I can still feel the residual effect on my tongue. The viscosity seems to be somewhat on the thinner side; there appears to be a slight citric zest in the finish.

Taste - The taste is consistent but has become more savory. The liquor has sadly become quite flimsy. Although it the flavors are quite nice, it is quite dim. I can only equate it to drinking a soda with no carbonation. 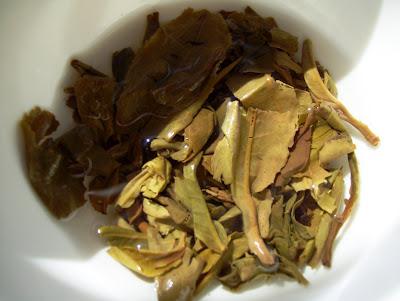 It appears that the leaves are nice tender spring plantation leaves. They appear to be quite healthy an consistent with the recipes claim of 1 and 2 grade leaves.

The CangEr tuo was flavorful, however the thickness of the liquor was disappointing, and at times I felt I was drinking flavored water instead of a supposed rich and slightly aged pu. Although it did have a slight aged feel to it, it was not as significant as other tuos which I have in my collection that are even younger. Only the first 3 infusions were lively. This said, I am not ready to say "NO" just yet to this tuo as I did enjoy its flavors which frankly IMO disapated quite fast in the subeseqent infusions. However, I believe that adding more leaf next time might remedy to some extent some of its deficiencies.

It is my understanding that many out in the pu drinking world have debated whether or not the price of the 2001 CangEr iS worth the price; on this particular occasion, sadly I must say no. I did expect more from the infamous 2001 CangEr Tuocha. Perhaps in a couple of years, my mind will change. 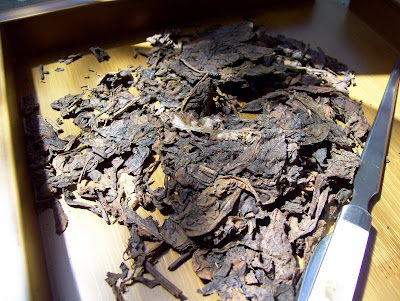 This Private Reserve was produced by the Yiwu Longma Tea Co. Ltd. in 2005. It is labeled as a "kilo" tea brick since it is an astonishing 870g. It is said to be composed of pure wild arbor from the YiWu mountain, claiming that it is one of the most authentic representations of a wild arbor pu on the market today.

One interesting note about this particular zhuancha is that the brick is not accompanied with a nefei or wrapper. I have surmised two possible theories for why this can occur 1) As a Private Reserve batch, it is possible that the brick was produced for a vendor who was subsequently going to to add their own identification marks later but didn't for some reason. 2) The Longma company decided not to add them as away of being more cost effective. Cotton paper with specialized print can become very expensive for a small factory. However, your guesses are as good as mine. Nonetheless, it is definitely an interesting find since I have never tasted a shupu that is made of YiWu wild arbor.

The leaves were were large and bold. I can assume that they are Autumn leaves from their general size. Typically, Autumn leaves are the largest of the harvest seasons. They are not heavily rolled or masticated from the wòdūi process, and in fact, you can literally see intact leaves which is quite interesting for a shupu in my opinion. Furthermore, the leaves seem to have been pressed in a traditional "handmade" manner since the leaves can be separated easily and are not heavily compacted. 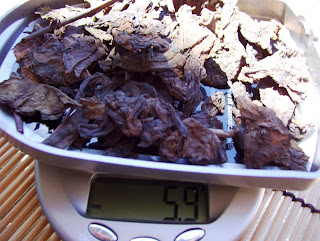 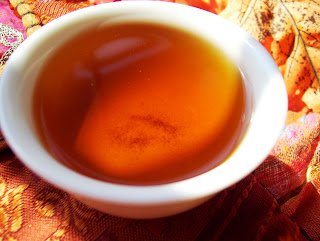 The first thing that I had noticed was that the liquor was quite smooth and mellow with an aged feel to it. It had a light camphor and woody taste, which lasted quite long on the palate. Quite soothing.

In my humble opinion, it tastes more like an aged semi-ripe pu than a shupu. This of course was definitely a surprise.

The liquor was quite silky and thick which coated the throat nicely. The lasting flavor emanated from my mouth and nostrils long after the swallow; very unusual for a shupu.

The subsequent infusion became peppery which really brought out the camphor and wood notes.

The liquor was crystal clear and a beautiful amber which did not change much after multiple infusions. 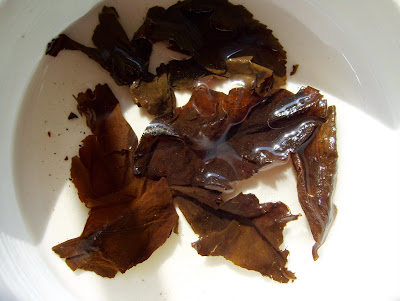 As you can see, the leaves are quite intact for a shupu. As stated above, my inclination is that they are from the Autumn season.

When you handle the leaves with your fingers, they seem to be quite strong and not easily torn. This could suggest that the zhuancha is a made of bolder leaf such that of a wild type. Of course it is difficult to suggest with complete certainty that the leaves are wild arbor, but the thick leaves do lead me to believe that it is a great possibility.

This shupu was an interesting find. In my opinion it is definitely a wonderful example of the potential of shupu. The liquor was quite subtle, yet had enough complexity to keep your interest throughout the session. As a result, the session did not become blasé which can happen with many shupus on the market
at August 07, 2007 5 comments: