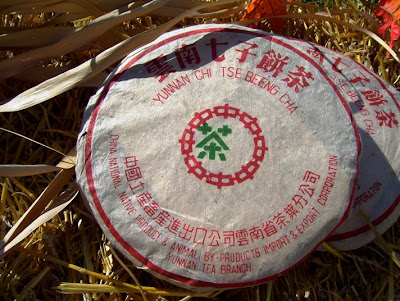 In 2003, the Henry Co. had commissioned the MengHai Tea Factory to produce the "Seriously Formula" Ching Beeng . Although the exact prescription is unknown, it is said to be inspired after the time honored 7542 recipe. For more information concerning factory commissioned pu-erh please visit a previous post. 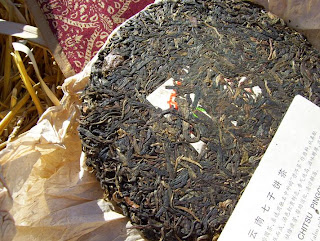 Though this was a commissioned piece ordered by an independent company, for all intensive purposes, it is indeed CNNP product. It had the CNNP standard weight of 357g and the "chung" cotton wrapper, nei fei, nei piao, and description ticket, all of which are reminiscent of the CNNP Chi Tsi Beeng Cha era. However, what makes this product different from most other CNNP product is that there was a seconded embedded nei fei located on the back of the beeng. 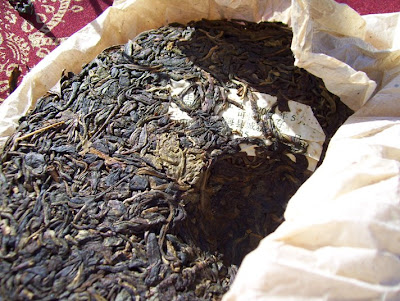 The cotton paper had a musty basement smell. However, once I let the beeng air out for a while, I was able to notice that the smell did not carry into the beeng. Relieved! It had a lovely freshness with the aroma of pine saw dust.

The leaves appear to be aging nicely and are turning brown, tan and in some places beige. They were also nice and glossy - a good sign of proper storage.

The beeng was not as heavily compacted as most of the "big factory" new born pu-erh on the market, and as a resul, it was relatively easy to flick off a scant for brewing. 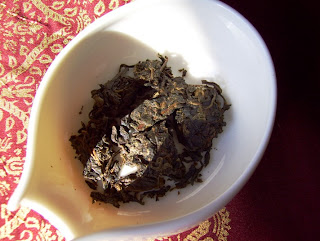 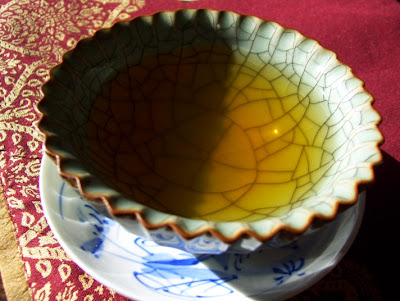 There was really nothing remarkable about the brewing itself. I started off with roughly 5.5g as I do with most of my slightly aged shengs. Since the leaves were quite separated, I had decided to give the pu a very short wash as there was no need to have the water break up the leaves. You know exactly what I am talking about if you have brewed XiaGuan lately.

The aroma from the sniffing cup was delicate and pleasant. It was very woody with a sweet floral character that is rarely found in the 7542 recipe. It also had a pleasant musk that kept most of the sweet notes in check. Musk is one of my favorite scents found in pu-erh and have found it in varying degrees in most slightly aged sheng. However, there was indeed a generous helping in this particular example. In later infusions, the floral notes had dissipated. However, the woodiness was very persistent which later coupled with grassy and the scent of raw legumes.

The liquor, as in the aroma was quite woody. However, it was a very sweet woodiness and not the quintessential wood that we find in more contemporary examples. I truly loved it. The liquor also contained notes of perfume, raw sugar with the ever so light touch of caramelized honey. Unfortunately, these were its high points. Although there was smoke in the initial infusions, it quickly had dissipated after the 3rd.

On the downside, the liquor's viscosity was lacking, which resulted in the flavors not staying on the tongue as long as I would have liked. Furthermore, the liquor lacked in brightness, generally as a result of a low acidity feeling. I like pu-erh to have lots of brightness as I believe that it separates the flavors. Though the liquor was sweet in the first infusions, it did not have a lasting huigan. It is not all bad, It was one of the clearest liquors I have drunk in recent memory and I did enjoy the chaqi with its warm and inviting sensations. 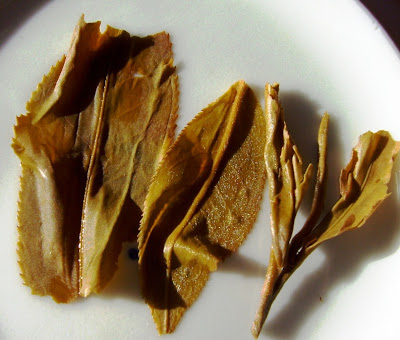 The leaves were very different than you would find in a 7542. They were not masticated as most factory fare. I as you can see, it appears that they used a combination of a 2 leaves - one bud prescription with a combination of larger leaves.

The 2003 Henry did not impress me as much as I had hoped; however, it did have its moments. I loved the pine and musk notes which seemed to be everywhere in this example. I've never had a pu-erh with this amount and concentration of pine. It was definitely different. Furthermore, although the Henry was inspired by the 7542 famous recipe of the MengHai Factory, the recipe number is practically all that the two would have in common. The 7542 examples which I have tasted have the MengHai taste and are relatively more aggressive. However, the Henry was not.

The Henry did not give me the feeling of a Spring tea. In fact it was more reminiscent of a late harvest or Autumn tea. I have yet to receive an Autumn feeling from a MengHai Factory 7542. Of course being an insipired beeng of the 7542 it shouldn't be the same.

After looking at the spent leaves, I did find what appeared to be Autumn leaves, although I am not certain if this is truly the case. They appeared large enough to be. All in all, it was an average beeng. However, this is the beauty of pu-erh, I may find that in 5 years I will have something to celebrate!
at November 15, 2008 6 comments: