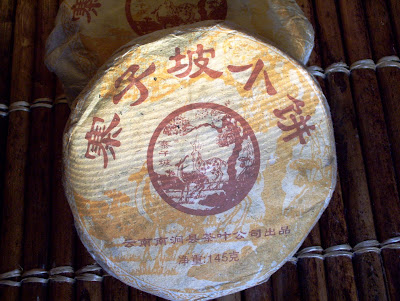 The mao cha from the Zhai Zhi Po region are different from the more popular and more known big-leaf tea trees that are found in Yunnan in that the leaves are considerably smaller due to the region's high elevation. As a result, the pu-erh industry has appropriately labeled these trees as "small-leaf arbor".

Although in my opinion, this mao cha makes great pu-erh its use is not without protest. In fact, there are on-going debates within the pu-erh community as to whether the Zhai Zhi Po can truly be considered pu-erh as it is not composed of big broad leaf type tea leaves. I encourage you to make your own judgment :) 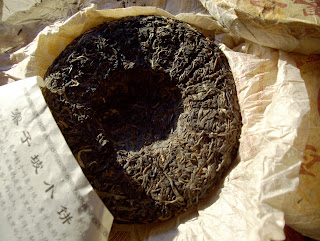 Having aged almost 4 years, the leaves are know starting to show signs of age. The leaves are turning a moderate brown with flecks of beige and give off a pleasant aroma which is sweet, with a delicate hint of tobacco.
When I pried the leaves from the beeng they seemed to have broken off without virtually any effort. The leaves are undoubtedly smaller than broad leaf. 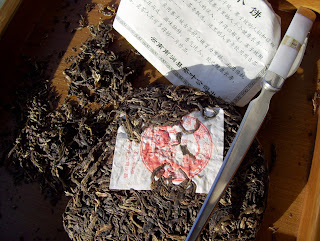 Aroma - The aroma was floral and smelled very sweet as it cooled in the sniffer. A very "tea" smelling liquor and not the quentiessential pu-erh nose that we have grown to love.

Taste - A very mellow brew with hints of grass and wood. The after taste was quite sweet with a bitterness that does not resonate until after the swallow. 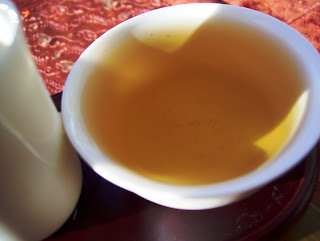 Aroma - There appears to be more woody notes laced with raw beans and grass; interesting. The floral notes seem to off set any vegtal however.

Taste - The wood notes are quite assertive now; the bitterness is a nice compliment to the sweetness which appears much stronger this time. The liquor is strong which seems to affect the sides of my tongue, though not intimidating. Although the liquor was quite thin, it still had a nice lingering taste.

Aroma - It appears to have even more of the vegtal and raw beans this time; pleasant. The woody notes seem to be fading but still noticeable. Still very nice and fragrant.

Taste - Nice and sweet, the bitterness is still pleasant which is keeping things active. Interestingly, there appears to be a flutter of fruit at the finish in this third infusion. I was not expecting that. 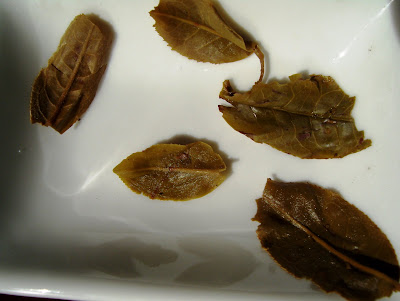 The leaves are a fraction of the size of big broad leaves.

I enjoyed this pu-erh. Although not as robust and lasting as others I have tasted. All in all it was a nice brew. It almost had a oolong quality to it. The liquor was not as penetrating, both in aroma and in depth, as I had hoped, it still was quite refreshing. It did have its moments and the only major weakness that I could assign to it was that its flavors did dissipate quite fast in the subsequent infusions. It was a flavorful cup while it lasted.
at November 11, 2007 2 comments: