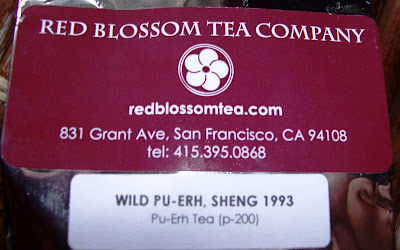 This aged Mao Cha is said to be a 1993 Wild Ancient Leaf Shengpu. Interestingly however, Red Blossom does not know the growing region or really any useful information other that it is said be made of ancient tea trees leaves from Yunnan province.

Although Red Blossom is ambiguous about this sheng's history they do know that about seven years after harvest, the tea was acquired by a family friend and brought to Guangzhou to be stored at his tea house and only then was subsequently purchased by Red Blossom in 2006. 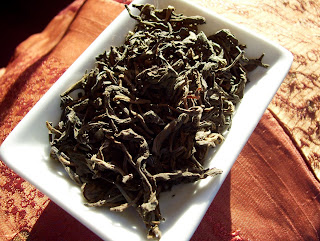 Before reviewing this tea, I had read some of the tea tasting notes that were kindly sent to me by others who also tasted this particular tea. Other tasters had suggested that the tea had a pleasant "spice" aroma in its dry state. I must admit that there seems to be a flutter of what appears to be the slightest hint of clove and/or spice which were then wrapped in an overwhelming aroma of beets. In fact, this is what I will define the dry leave aroma as - spiced beets.

It is virtually impossible to tell from the dry leave (well at least for me) if its claim of being Ancient Arbor is indeed the correct one. What I can suggest however is that the color and feel of the leaf does correspond to that of a sheng of the designated age. Furthermore, IMHO, I believe that the leaf may have been stored in a mild-wet environment before Red Blossom had acquired it. I feel comfortable in making this assertion due to the appearance of the leaf and the exceptionally "damp" aroma. Although most of my familiarity with aged pu-erh are with aged beengcha, Zhuancha and Touchas, the leaves do not have the same "aged slickness" as the aforementioned when dry aged. Of course it could be that the lack of it in its appearance could be the result of it being Mao Cha, but even so, I consider it suspect when suggesting that it is dry stored. I also found some sort of aged mold on few of the leaves which can be indicative of a wet stored environment. Lastly, the leaves have an overwhelming organic aroma with virtually no nuances and variation. Although this of course can be normal to aged pu, IMHO the aroma is more reminiscent to that of wet-stored pu-erh. This said, I do believe that it is important state that Red Blossom never made the claim that it is dried stored. It is only my own personal judgment.

Aroma - The aroma was quite woody and earthy with a flutter of camphor. Unfortunately, there was no development when it cooled. 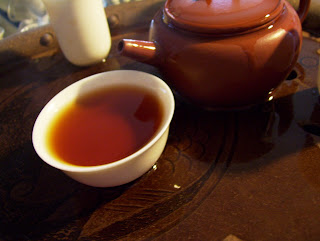 Taste - The camphor aroma carried itself into the liquor. It was more bitter than I thought it would be for being aged. It was indeed thick with a nice viscosity.

Aroma - There appears to be the same notes as previous, however, with a more subtle sweetness. Slight buttery notes as it cools.

Taste - More sweetness this time and the bitterness seemed to have waned some.
The liquor is still nicely thick which a lingering finish which seems to coat the throat. The woody notes seem to be everywhere.

Aroma - The aroma is the same, however, with touch of dry grass this time. The The camphor seems to be really asserting itself.

Taste - The sweetness is the same with no bitterness. The camphor notes are still very present. The wood notes seem to be the predominate flavor this time. This said, it appears that the flavors are more bright this time. 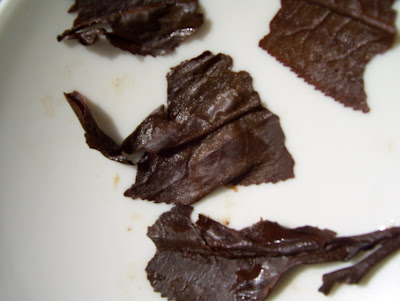 There is not much to say about the leaves other than I do believe there is a blend of different types and that I can not tell conclusively that they are wild arbor. Although, their appears to be some robust leaves which could prove to be wild arbor, but even this can be misleading. This said, it is possible that they are wild leaves sense they are 1993, and in 1993 wild leaves were not as difficult to acquire as they are today.

It was an ok sheng, albeit there are much better examples. It created a liquor that was quite assertive with a lingering after taste - flavorful. I do not believe that the quality is very excellent, but nonetheless, it was drinkable. It would be comparable to a mediocre wet-stored sheng. Thanks again Sal for sending me this sample and the many others from you that have found their way to my mailbox! !
at October 21, 2007 5 comments: