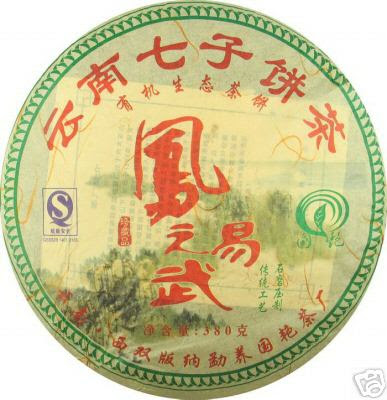 As some of you know from reading previous post, I do like Guoyan products and this product is no execption. Ms. Dong a former employee of the MengHai Factoy prides herself on crafting pu-erh that is both high in quality and econonomically priced. For further information please vist the Guoyan website at www.guoyancha.com or simply view my previous post.

The Mengyang Guoyan Phoenix of Yiwu Pu-erh 2007 380g Shengpu is limited to 10,000 beengs and is certainly to become a prized collectable. Guoyan suggests that this beeng is entirely made of organically grown, wild arbor, and early spring leaves from the YiWu area which were subsequently processed utilizing traditional methods such as pressing the mao cha with stone molds. 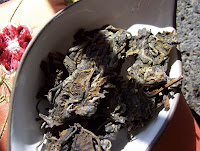 The dry leaf seem to suggest that it is spring and wild arbor as there is a significant amount of down on the back of each bud. It has a real nice floral smell with no smokiness.

Aroma - The aroma was very soothing. It had variable hints of honey, floral, fresh grass and the slightest melon. Very herbal.

Taste - Light and refreshing. Sweet honey and citrus were most noticible. It was slightly bitter which played well with the sweetness.

Aroma - The citrus and honey are now stonger. Both aromas were wrapped with a hint of dried fruit, possibly peach.

Taste - More youthful this time but not brassy. A quenching and soothing sweetness playing well with the tantilizing bitterness. A delicate taste of natural rubber is introducing itself. Lovely viscosity.

Aroma - Citrus now fading, however the honey is still very noticibale. Still very floral with a fruity undertone. I believe I am smelling more peach.

Taste - Really nice this time. All of the flavors seem to marry well including the natural rubber. A bit more bitterness but not intimidating. Still has a very nice viscosity. I would expect my throat and tongue to be coated by now, but suprisingly, they are not. There is a subtle but lingering pineapple aftertaste. Excellent! 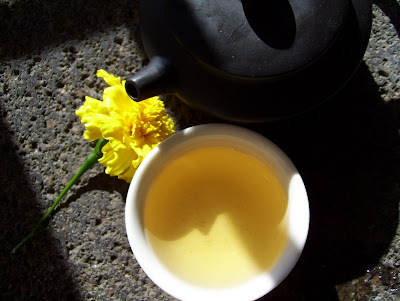 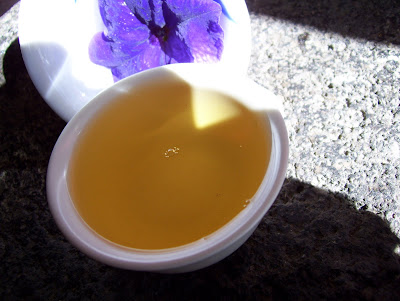 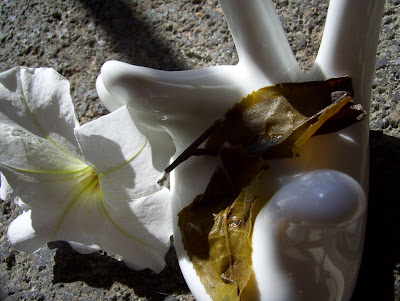 I assume that it is wild arbor.You can clearly see nice buldging veins which typically would indicate that it is not plantation.

This beeng is fantastic for the price. It was a delicate yet assertive drink. Its taste was very characteristic of semi-wild arbor than true wild arbor as I suspected as I would expect to pay more for true YiWu wild arbor. Nonetheless, from what my taste buds have told me it did resemble YiWu mao cha with the delicate flavors of first-flush buds as the description implies.

I believe that the leaves will age nicely since all of the indicators were present. All in all it is a reseasonably priced beeng which should become a collectable as there were only 10,000 beengs made and nicely crafted. All I have to say is DaYi and XiaGuan better take notice! Oh, and I thought that I would have fun with my camera today LOL.
at June 26, 2007 14 comments:

Per request and you know who you are, I've posted a few more pics. The clay was supposedly mined from the Dragon Hill Clay Mine. Its volume is 120ml.The chop mark on the bottom is not an artist signature, rather the name of a shop that was quite famous during the Qing Dynasty. I think it is pretty safe to suggest that the pot is not from the Qing period, but has been evaluated between 20-40 years old by a professional.

As you can see from the first pic, you can vaugely see the 'joint line' that most zhu ni pots have. Furthermore, in the same pic, you will notice a stress crack on the inside rim. As zhu ni shrinks in the kiln, they can crack due to the amount of shrinkage. Fortunately, the particular crack does not affect the pot at all. :) 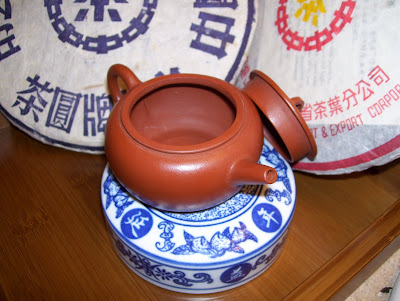 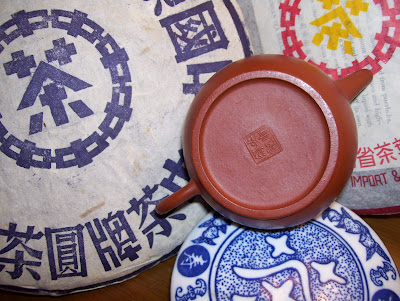 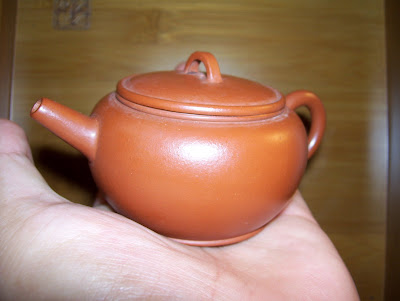 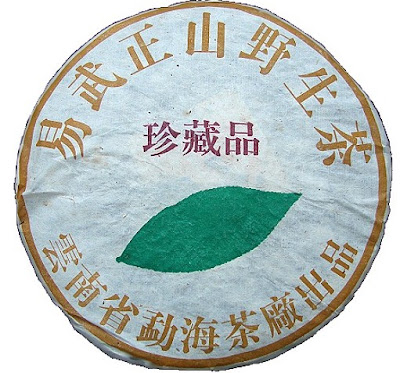 I am certain that some of you have asked what is exactly meant when you purchase or examine a “special ordered” pu-erh. It is very simple really. As some of you already know, the big eight factories use a coding system where the combination of numbers will identify the year the recipe was developed, leaf grade and factory. For example the Sheng 7432 will tell the buyer that the recipe was created and used since 1974, composed of mostly 3rd grade mao cha and was produced in the Menghai factory represented by the number 2. However, in the case of “special ordered” pu-erh produced by the these factories the coding system is absent - for a good reason. Generally, “Special Ordered” pu-erhs are created at the request of a collector(s), a vendor, and at times the Chinese government for various reasons such as to celebrate or commemorate an occasion, for nostalgic purposes or simply because a vendor or distribution company are dissatisfied with what is on the market and want to try their hand at being crafters. Here are but a few examples of commissioned pu-erhs:

In 2001, one of MengHai's special-ordered productions was the MengHai a Green Tea Leaf Collectible of Precious Grade or better known as the Yi Wu Zheng Shan "Special Order". Super premium Arbor mao cha from semi-wild old plantations which were located in the Yi Wu area were utilized. What exactly are semi-wild or half abandoned plantations you might ask? Well, they are called this because after the over-throw of the Qing Dynasty, and as a consequence of the political turmoil that insued, many of tea plantations were neglected. As a result, these plantations were uninhibited to grow without any manipulation my humans such as trimming, insecticides and so on creating a leaf that has different characteristics to that of plantation. The arbor leaves which went into this particular beeng were growing intermixing with other camphor trees, which according to experts this was a typical and early method for repelling insects.

There had been lots of speculation and buzz in regards to this beeng, and as a result, this particular beeng has become quite spendy and scarce. In fact, if it were not for David of the Half-Dipper Blog, who was generous enough to send me a sample I may have not been able to taste it. THANKS DAVID!!!! 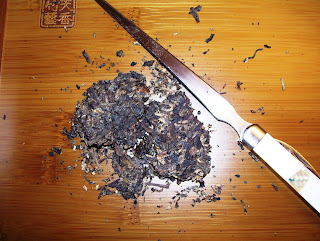 Initial Impression - It was easy to see that the leaves were aged, however did still have some of its green naiveté. There was no indication that it was improperly stored.

Source - David of Half Dipper 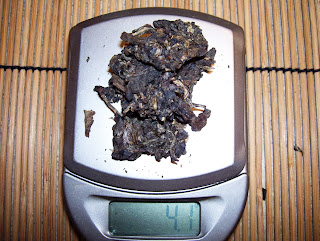 Aroma - There was lots of activity in the aroma. The first infustion had aromas of Wet wood, suttle hints of leather, perfume, cigar tobbaco all with the slightest berry background.

Taste - Execptionally silky with a playful vibrance that tantilized the sides of the tongue. Its palate was just as complex as its aroma with coffee, brown sugar and buttery notes which were all beautifully sweet.

Aroma - More wood, however there seems to be hints of dried grass. The leather and cigar tobacco were still present.

Aroma - The aroma is still filling my nose with great sweetness, less leather however still very noticable. Tobacco is still adding to the complexity of the faint fruit-berry background. There seemes to be a hint of raw beans now.

Taste - The sweetness definitely produces an active mouth, the notes are still the same as the previous infusion, however there seems to be what seems to be the taste of corn silk at the finish. 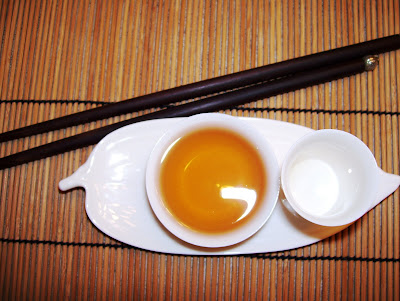 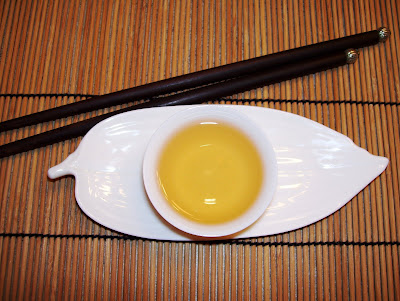 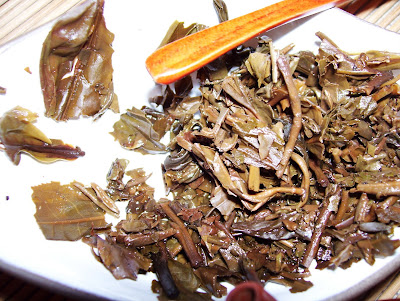 The mao cha was mostly buds and were quite masticated. Possibly as a consequence of its processing so I can't really compare it to other semi-wild arbor leaves that I have had the opportunity to inspect.

I really liked this pu. Its coffee and chocolate quailties did surpise me as I have never tasted these flavors in a Yi Wu sheng. It is so complex that at times, it was hard for me to grasp what I was drinking. Active is the only word I can think of that can properly define this pu. The subsequent rounds for the most part were the same however with variable difference. Closer to the exhaustion of the leaves, there seemed to be more of a greenish character consisting of the corn silk and raw beans notes.
at June 21, 2007 3 comments:

I have decided to change the format just a bit to help me post more frequently. As some of you are aware, I am currently entering a new phase in my academic career which will undoubtedly occupy a significant amount of my time. However, I would like for you all to rest assure I will still be very active in my blog as well as in other forums, blogs and chat rooms!

I have decided that I will continue to post tasting notes, however will limit the product segment. This is not to say that I will not continuously offer research when available - to the contrary. However, I will only give the product research if I am able to easily find it. (I usually do since I have impeccable internet research skills ) but , will not spend a great deal searching for it if I can not. The format will not change much, in fact, you may not even notice. What I am asking for is forgiveness if in the event I have decided not to add the research segment in a particular tasting note. Further more as a consequence of my collection having an enormous amount of samples, I will at times only show the leaves from a sample and not an entire beeng or zhuan but will take pictures of both the wet and dry leaf. If you have any suggestions or complaints please send them my way!!!