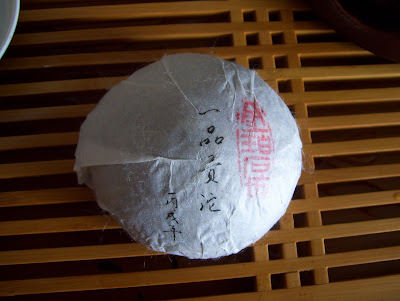 This particular tuo was given to me by my good friend Gordon of the Ebay store Dragon Tea House. It was his only one and felt that I would enjoy it.

I am not a big collector of white puerh, and frankly I have only tasted a few. Nonetheless, white puerh is an interesting development in the production of puerh. White pu-erh is still a relatively foreign concept that had its inception roughly 6 or 7 years ago - this is where it becomes interesting. Since the practice of producing white puerh has only been a few years, its aging potential is yet to be determined. However, what is certain is that white puerh has created two very opposing and different opinions. Some will argue that silver bud pu-erhs are not well suited for long term aging and that the delicate white buds will lack the necessary flavor and complexity to fully age. However, others also will contend that the tender silver buds will age just fine and that the mellow white buds will actually provide an interseting palate and may even smooth out some of the rough edges. Of course the jury is still out. The tuo is a 2005 made the Jin Bi Fang, which is a relative-ly unknown manufacturer in Yunnan. Its name Yi Pin Gong Tuo, literally the first grade tribute tuo cha.

It was quite clear that the tuo was made with great care as signs of craftsmanship were evident. It was wrapped in a handmade high fibrous cotton paper where it was then hand signed and hand stamped. Certainly not a massed produced tuo.

The tuo itself had no peculiar odor other than a very faint floral scent. It was a joy breaking up the tuo when compared to the many others. As some of you know, some tuos are infamous for being on the hard sidem and for some, this is an understatement. However, this tuo was quite different. In fact, I didn't need to use any tools as the tuo easily broke apart with nothing more than my hands. 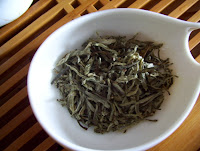 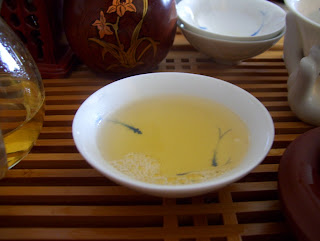 As you can see, I purposely let the water cool for 5 breaths which generally is a bit more for puerh. Understanding that the tuo is still a "white" tea, I was careful not to shock the tender leaves as scorching water would certainly do. The liquor was beautifully clear and reminiscent of a light roasted high mountain wulong.

There was the pleasant aroma emanating from the fair cup which at first I could not easily define. However, after a couple of sniffs it finally struck me that what was wafting up from my sniffing cup was vanilla - not just a hint but a considerable amount. This had a very soothing and calming effect on my mind.

The liquor was unquestionably sweet and infused with the essence of vanilla. It had a wonderful viscosity and a playful acidity which kept things moderately active. The huigan was nice, but the throat feel was not very lasting. 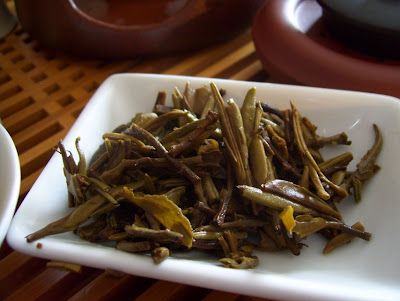 For some, these notes might be pleasing, and in fact it was a nice pleasurable brew. However, one important element was lacking - it did not taste or resemble a puerh tea. I drink puerh because I love its taste. If I wanted to drink an oolong, I would of gladly made some. Furthermore, I have never tasted a young puerh that had any notes even resembling vanilla. I can see why some in the puerh world do not consider this type or puerh appropriate, and I will also have to agree. After 3 years of aging, the liquor was still quite green with no maturing notes that one would find in a da-yi "big leaf" puerh.

However, to be fair, this is not to suggests all white puerhs are indicative of this tuo. In fact, the others that I have tasted were not as delicate or as oolong-y as this one. I don't know if its uncharacteristic profile is due to the 3 years of aging, and the silver leaves just aren't able to transform; or if its the buds themselves or perhaps a combination of both. I suggest you try and make up your own judgments.

On a better note, I actually broke up the entire tuo and took it to work as I truly loved its vanilla, green tea quality and felt it would be a good office drinker.
at February 12, 2008 9 comments: