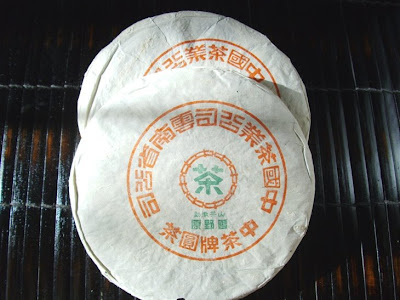 I have had the privilege of tasting and comparing both. My conclusion and possibly everyone one elses is that although they were produced by the same factory and made of the same mao cha, "Mengsa Shan", they are indeed different animals. Interestingly, the paper of course is the culprit. The thick paper allowed for more of the moisture to linger longer on the surface, and consequently causing less evaporation. Conversely, the thin paper allowed for more 'breathable' conditions lending itself to more of a dry storage condition.

I have read numerous thoughts suggesting that the thin paper version is much better than the thick paper example. I do plan on reviewing the thin paper but until then here are what the some of the experts at Teapot Magazine have to say about it. 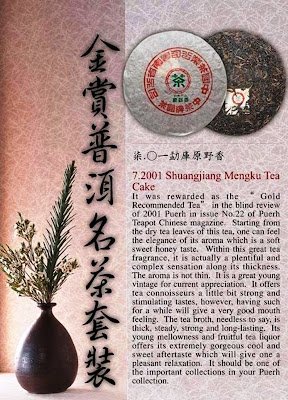 "..elegance of its aroma with soft honey taste. Within this great tea fragrance, it is actually a plentiful and complex along its thickness. ...very good mouth feel...extremely cool and sweet after taste."

Needless to say, the description is tantalizing and I agree having tasted it first hand. However, to suggests that the thin paper is better, in my opinion, is not fair. Both both great in their own away and offer something different to the puerh world. The thin paper is a great example of the potential of a dry stored pu-erh, while the other is an excellent example of wet storage beeng. Though, perhaps, the wet storage effect may have been accidental, it does provide a good bench mark in which to judge the potential of other HK storage or wet storage beengs.

I was not "wowed" when I first unwrapped the beeng. It looked like your quintessential HK storage fare. The leaves did not have any signs of mold infection, which was great considering how dark the leaves were. Although there were a couple of 'frosty' stems in the bunch the surface was very clean. The aroma was a bit dank but other than that it looked like a nice beeng. 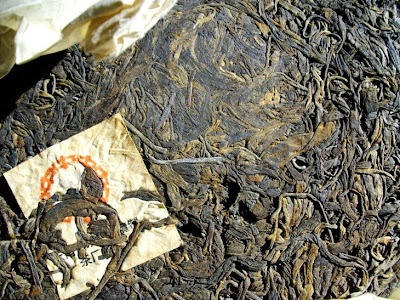 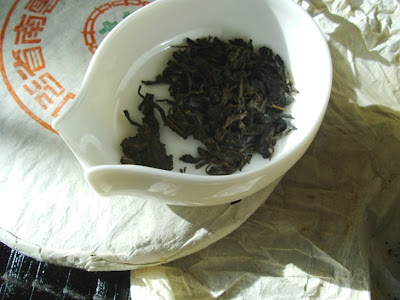 The initial aroma was what you would expect with a wet-stored beeng. Lots of matured earthy wood notes with very little nuances. On occasion I had caught a whiff of camphor but for the most part, generic. These notes aren't bad and were quite expected, however, what was not expected was that they had become sweeter after the 5th infusion. There were slight notes of honey, fresh grass, dark currants that were enveloped in a medicinal quality. Generally, it has been my experience that wet stored fare will remain consistent throughout the session. Indeed a nice surprise. 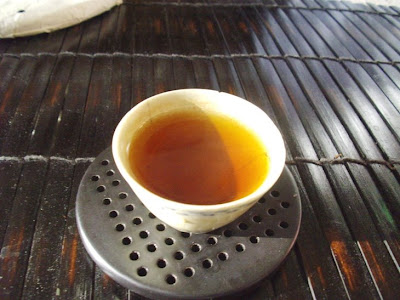 The taste very much resembled the aroma, notes both in theme and in transition. Initially, the notes were dark and matured. Very woody, very earthy, with an almost cacao finish. The liquor was very think and had a gelatinous quality. It was far more viscus than I would have imaged. Later in the infusions, the notes had also become a bit more sweet, and in fact some of its youth gleamed through. The liquor had a pleasant feeling as it entered the throat. In the most latter infusion, the darkness very much dissipated which left only notes of fresh hay intermixed with freshly cut wood essence. 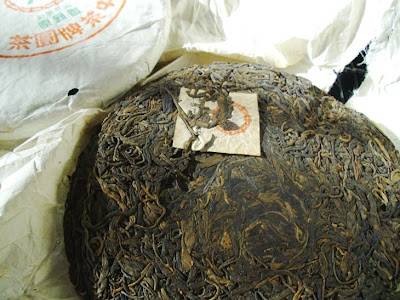 First and foremost, I tried not to judge this beeng comparing to its much more revered twin. In the final analysis, the thick paper certainly has much to offer. I have had many wet stored examples which leave you uninspired. However, the thick paper MengKu certainly is a great example of the potential of wet storage fare. On the down side however is that it did take time for its huigan to come through. Yet, when it did, it certainly was decent. Another caveat is its current price.

Although it is certainly ready to drink now, I believe that given time to allow some of the maturity to diffuse may reveal something much more exciting.

I think this is a good time to unveil my new cup! Well, many not that new but new to me. Its an early Ming Dynasty making it roughly 600-700 years old . It's porclain, roughly 40ml in volume and very smooth. It is hand painted in a rustic pattern in blue which has certainly faded over the centuries. I love saying that :P 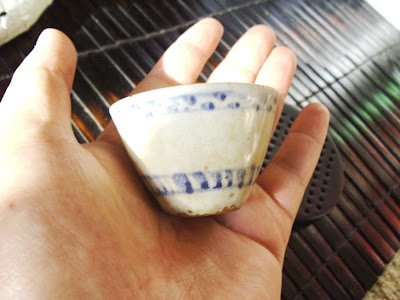 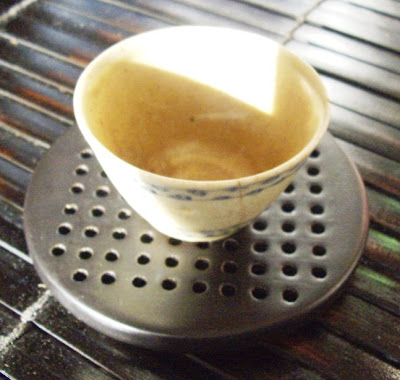