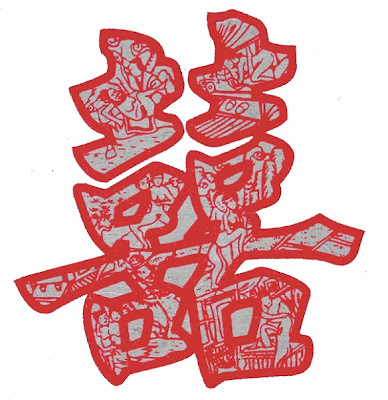 To all my readers, I would like to first apologize for my absence. I have been quite busy but now things seem to be letting.

I am sure that many of you are quite familiar with Lao Banzhag Shan. However, if you are not, Lao Banzhang Mountain is growing area which contains an abundance of ancient tea trees located on the North West slope of Bulang Shan. This region's pu-erh is possibly one of the world's most sought after due to its aging capability and aggressiveness. Aficionados will go through great lengths to add Lao Banzhang to their collections and will pay an exuberant amount of money to do so. Nada of the the tea blog A Felicific Life has provide an exciting intimate look of Lao Banzhang village for those interested. I recommend that you do. You can also read more about Lao Banzhang in a previous review of the Mengyang Guoyan Lao Banzhang which also details Lao Banzhang in greater detail.

Xi-Zhi (Double Happiness)Hao is the brain child of pu-erh collector and aficionado Mr. Chen. Having its inception in 1997 just at the time when CNNP allowed privatization of pu-erh factories, the San Ho Tang the manufacturer of Xi-Zhi Hao and have begun to take the pu-erh world by storm. Mr. Chen is known to personally scavenge tea forest to find the best mao cha and painstakingly oversees every aspect of the manufacturing process. All of his products are unadulterated leaves. If it reads Lao Banzhang than you can rest assure this is what it contains. This particular beeng is made of mao cha from semi-plantation that was sun dried in the traditional way and subsequently stone pressed. If you pay close attention to the image above which is displayed on the wrapper you will notice that it is a bit risque, they are called " Chun-Gong which means Spring Mension" figures. Please visit the HouDe Blog for more information.

This is truly a hand crafted product. 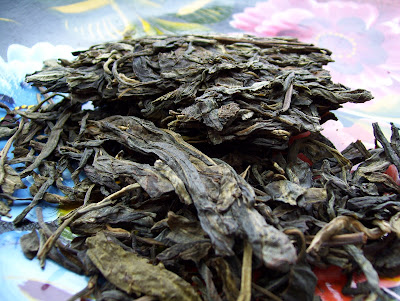 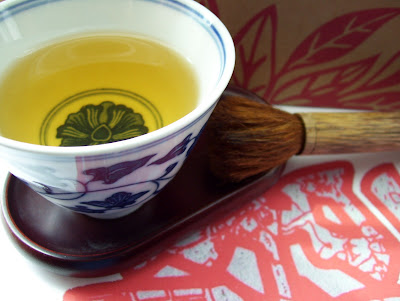 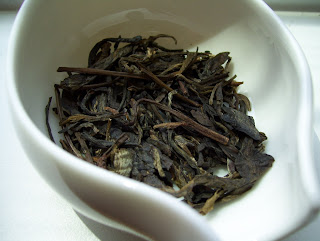 Liquor - The liquor was somewhat on the greenish side for 3 1/2 years of aging. However, it was wonderfully clear which indicative a good 'kill green' stage. It had a nice sheen to it which reflected light very well. Lovely.


Aroma - The aroma in the cup had many layers which revealed themselves as the liquor cooled in the sniffing cup. There were notes of dried hay, vegtal, muted honey, layers of dried wood, all laced with the too familar and wonderful sweet aroma of pu-erh. In later infusions, the aroma began to resemble raw legumes again with the pronounced woodiness. A very clean aroma.

Tasting - In understanding that the tea I was drinking was Lao Banzhang, I had prepared my mind for an aggressive tasting tea. My first impression of the first two infusions were "Humm, I can take it, no big deal". Boy were my sentiments wrong by the third. The first two cups were somewhat subtly sweet with notes with wonderful woodiness. However, by the third, the liquor became dry (in the wine sense). The liquor had begun to be quite assertive. The muted flavors were starting to be challenged by the pronounced bitterness and acidity. I was worried that the bitterness would somehow over power the pleasant notes which would make for an unpleasant session, but to my surprise, it was a perfect balance. Notes of caramelized honey, dry grass and dried figs which seemed to permeate the insides of my cheeks, tongue, lips; it was everywhere . By the 5th infusion my entire mouth had become numb with flavor. Definitely a powerful brew. The chaqi was also starting to reveal itself by this time, but not in a comfortable sense. I began to perspire and feel light headed and hungry. By the end of the 6th infusion I decided that it was a good time to stop although I believe it could of gone for at least 3-4 more. 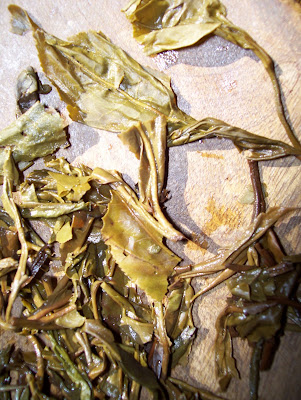 Considering my uneasiness with a few of their products lately this particular Xi-Zhi reminded me of how good Xi-Zhi can be. But to Xi-Zhi's credit, my impressions were made with the mid-range beengs that I had purchased. Although those aren't bad, you can certainly tell the difference between qualities from the more, I hate to say it, more expensive offerings. The liquor certainly did remind me of Lao BanZhang and I only wish I had a bag of money to buy much more. Now, if you please excuse me I am going to go and lie down.
at July 20, 2008 6 comments: