Apologise to my readers for the long delay in posting. Rest assure that I do not plan on killing my blog. Please look foreword for other reviews in the VERY near future!

I was readjusting my pu closet and to my surprise had found this little nugget of gold - A sample of 8582 that I had purchased sometime back! I love it when this happens.

Well, for many of you, I am sure that 8582 needs no introduction since it certainly has become a perennial favorite for many; and rightly so. Current aged examples are quite delicious and seem to age just as well as other "higher grade" leaf. I think I need to explain what I mean by higher grade. Many tea drinkers who begin to collect too more often than not assume that higher grade of mao cha is more suitable for aging than others. Well, this is not entirely so. The grade of the leaf only corresponds to the size of the leaf and has really nothing to do with its quality. For instance, when we have a MengHai Dayi 06(2)2 recipe, we can assume that the majority of the tea will have finer and more bud like leaves since the number in the paren will always indicate leaf grade - in this case it is a 2. However as I had previously stated, this will not always translate into a cake which will age. In fact, many cakes which are considered finer grade are not showing promise at all.

Now back to the 85(8)2. As will notice, the leaf grade in this recipe is a grade of 8. This will mean that the Marjory of the beeng will be composed of 8 grade leaves - generally bigger and heartier fare. The 8582 has become a perennial classic since many of the older 8582 are showing great signs of promise. I like them in my own collection for this very reason. 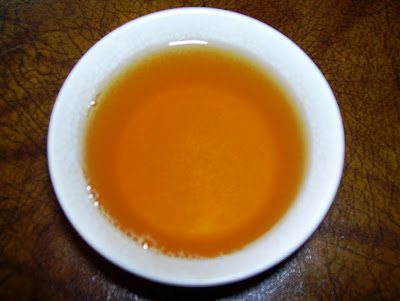 I was surprised that there was still a hint of honey in the aroma. Albeit faint, it was still noticeable. The dominant aromas however were hay and pleasing wood aromas. Latter infusions were somewhat sweeter which with an ever so lovely musk. The aromas were long and lasting and did not dissipate easily from the aroma cup. Nice potency.

The flavors were richly brite and slightly tannic and acidic- though not obtuse, but delicate which complimented the richness of the liquor quite well. As in the aroma, the wood notes were dominant which transformed on the palate as it cooled on the tongue. The texture and viscosity were impeccable making the throat feel comfortable which the swallow.

It was an orthodox puerh. It was enjoyable but was not as inviting as I had hoped. The huigan was lacking which did not correspond well with the sweetness of the aroma. On a good note, the chaqi was pleasant and comfortable.
at October 12, 2009 1 comment: