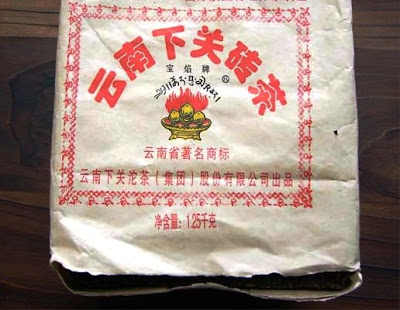 As some of you are aware, XiaGuan makes a number of products sold under different labels for export such as the Bao Yan "Holy Flame" label.

Interestingly, most of the Bao Yan products will be exported to Tibet where the Tibetans will make a rustic concoction call yak butter tea consisting of, you guessed it, Yak butter, young raw sheng and sugar. As you can probably suspect, products sold under the Bao Yan label are generally made from Lincang materials of low to mediocre quality as they are intended to be consumed now. This said, you can find aged examples on the market. 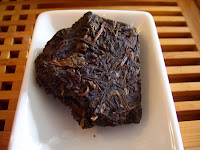 As you can see, the leaves are not the best of quality, although after 7 years they do appear to be aging as they are turning a nice leathery brown. The tea has virtually no smokiness which is quite a difference from the young Bao Yan bricks I have in storage. 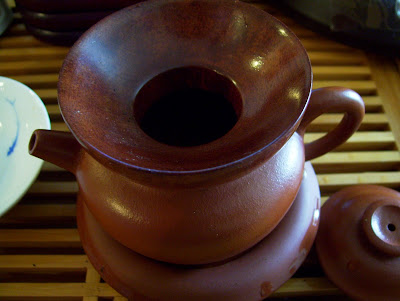 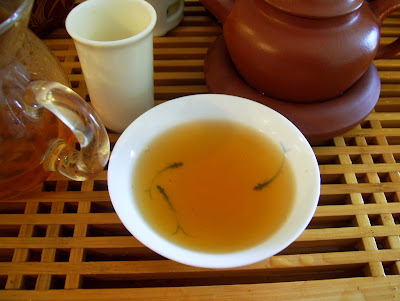 My first idea was to give an infusion by infusion description. However, after tasting the liquor on the first and second round I had noticed that the flavors nor did the aroma really evolve. I don't want to give you the impression that the tea was bad, too the contrary. However, what I am saying is that it did not transform.

The liquor was nice and clear with a nice aged amber tint. The aroma from the sniffing cup was pleasantly woody with burnt honey notes. As the liquor cooled, the woodiness dissipated and became somewhat floral.

The liquor did have a slightly aged taste. Again, as in the aroma, it was very woody. The liquor had a nice viscosity and a pleasant silkiness. The acidity in the liquor also was nice and kept the session active. The liquor did become a bit more astringent which of course is expected in a slightly aged sheng. You can clearly taste a slight green naivete. The later infusions became less woody which did allow a faint floral note to come through. The liquor really did have a slight huigan which was a surprise for me as I really thought it would be a dud in that department.

As you can see, the leaves are true to the claim of mediocrity. They are quite masticated. Nothing special. These torn and masticated leaves are certainly one of the reasons that Ban Yan products are compressed exceptionally hard since anything other than hard compression will virtually make the products fall apart during transit. In fact, I am comfortable in calling the leaves fannings. 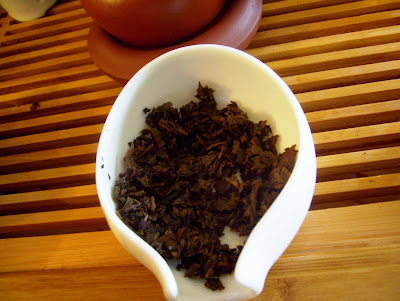 The sheng was indeed palatable. The liquor was a bit dry but not boring. In fact, it did have its moments. If anything, aging Bao Yan products can certainly provide a learning experience for what time and careful aging can do to sub par pu-erh. Again, although not typically sought after collectors, you still may want to acquire Bao Yan products aging for future consumption. There is every reason to believe that Bao Yan may age well enough to become an everyday sheng that won't break your bank. I know I am! ;) 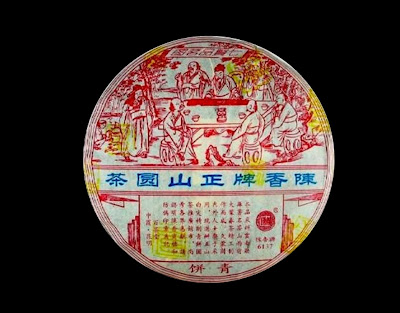 Bai Cha Tang puerh is the brain child of Mr. Ai Tian. Mr. Tian, who is also the factories tea master, is not just producing puerh to leave his mark on the puerh world, but is also on a personal quest to bring puerh back to its pre 2001 standards when quality and not quantity were paramount. He is intimately involved in all aspects of the puerh process and uses his 20 years of production knowledge to insure that his products are produced with the up most care and quaility. Mr. Tian takes puerh so seriously he purposely leaves a barrel outside the factory gates so that when he personally identifies a “fake” product, he will subsequently label the inappropriate puerh and throws it away for all of the community to see. ( There has been some concern about of some factories producing puerh using mao cha outside the Yunnan area and issues of counterfeiting due to the enormous demands of the market.)

Though relatively new on the market, his products have already made some headway in the puerh world with competition wins such as his win at the China's Tea Cup competition last year with his 3rd generation cake. For further information on counterfeiting

The 7th generation cake is a high end product of Mr. Tian’s arbor tea series line-up. The beeng is said to be made of Ancient wild, sun dried premium Mengku broad-leaved material from Lincang which were subsequently pressed using the traditional method of a stone mold. 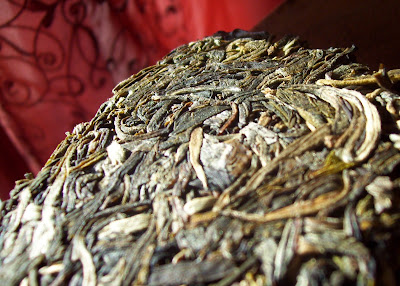 The beeng omitted a strong and pungent odor of puerh. From the odor alone I could anticipate that I was in for a delightful gongfu session - I hope. Lately, most pu-erhs have not been very aromatic, where products of the Lincang area just for the most part falling below par. However, the 7th Generation seems to take what is best of the quintessential puerh smell and amplifies them with virtually now smoke. Although abundant honey and florally in character, the aroma seems to be put in check with its abundant rubber hints. The leaves appear to be healthy, and of choice. It was evident from the compaction that it was indeed stone pressed. Nice surprise. 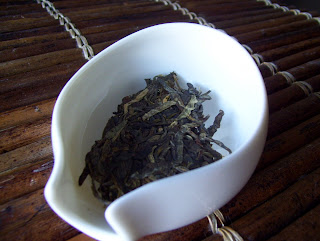 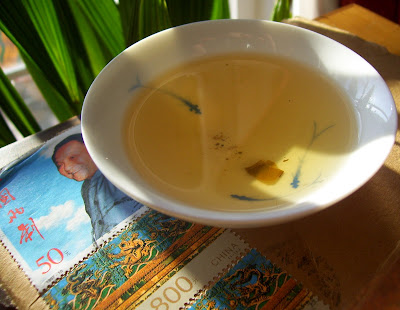 Aroma - It appears that the dry smell carried itself into the liquor. It has pronounced honey and floral notes that were laced in a pleasant rubber smell. As the liquor cooled in the sniffer, the notes all transformed into a wonderful musk.

Taste - The liquor was virtually free of any prounounced bitterness that you would find in a young sheng. Although the tea did have a nice huigan, it was unfortnately not as lasting as I would of liked. There appears to be a slight melon flavor at the end of the swallow when the air hits the back of the throat as I breath in.

Aroma - The floral notes has dissapated somewhat, but still noticeable. Hints of rubber were enveloped in a hint of grass. The musk is still noticeable as the liquor cools.

Taste - There appears to be a more noticeable astringency but not unpalatable. In fact, it keeps the flavors bright. The chayun is now alerting my other senses. The sides of my tongue are tingling while the back of my throat and the roof of my mouth are pleasantly warm.

Taste - The huigan is at full throttle. Nice and lasting. The chayun is still making this gongfu session quite active. The flavor profile is very much consistant with the previous notes although to my suprise there seems to be a flutter or berry. The sides of my tongue are now numb but not in an offending way. The flavors are now thick on my breath as I breath in and out. Nice! 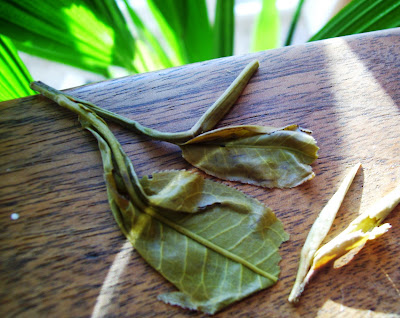 The leaves look like a good combination of leave vs buds. Nice robust veins which may be indicative of a wild variety.

I do like this pu-erh. Its aroma and its flavor profile were nice and thick. The liquor has a decent viscosity which is always nice. I generally get a tired sensation if the liquor is flimsy. I did feel the qi after the 3rd infusion. My knees started to hum a bit and I started to perspire. I even had to open my window in 32F weather in order to continue. The taste was reminiscent of the MengKu area which in my opinion generally have more of a longer lasting wood and rubbery taste. The activity in my mouth did remind me of the ancient leaf variety. As with most pu-erhs, it is impossible to know with any degree of certainty if it is made of entirely ancient arbor material. However, the behavior of the tea did indicate that it may well be. Nice.