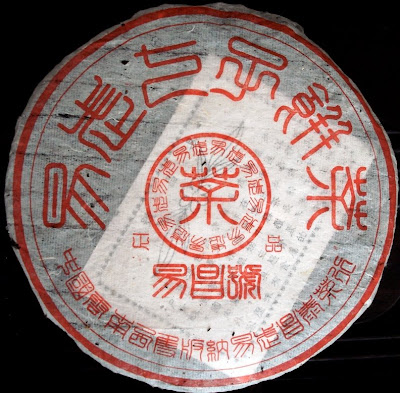 I always like Yi-Chang products, they are consistent and are really a nice balance between price and quality. This particular example is no exception. For more information about the factory itself, please visit a previous post.

This particular example was acquired from Eloi of Sampan Teas, a Canadian vendor. Although his stock is not expansive, he does have an interesting selection.

I always enjoy drinking teas that were produced prior to the Pu-erh craze. Some suggest, which I concure, that after 2004 the quality of pu-erh has greatly suffered as consequence of increasing demand - This is a discussion that perhaps I may touch on at a later date. Needless to say, 2001 may represent some of the best that Yunnan has to offer until this god awful craze comes to an end. That said, what makes this particular beeng even better is that the mao cha is from YiWU shan, a highly sought after growing region.

YiWu Shan has a devouted following primarily for two reasons 1. YiWu shan is rich in pu-erh history and 2. its mao cha is full pleasing flavors with an almost incomparable sweetness earning it the title of the Queen of Teas. Click here for more information on YiWu Shan.

Let's get to business 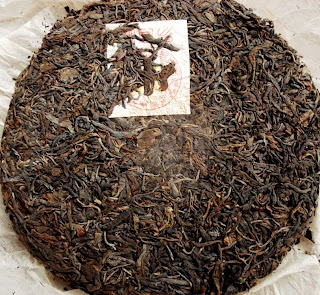 The dry leaf aroma reminded me of a quintessential Hong Kong product. Although Eloi suggests that it had been dried stored in Taipei for 7 years, excessive humidity has sped up the aging process to a considerable degree. Certainly Taiwan has a drier climate than let's say Macau or Hong Kong; however, if vendors do not properly rotate their stock or provide adequate airflow, their stock may 'age' faster than those which were. This is only speculation. Nonetheless, it should not be considered a defect since many pu-erhs which have acquired more than normal humid aging conditions produce great and tasty teas. Frankly, I would still consider this a dry stored beeng since it has not reached the level of a traditional wet stored product.

The leaves appear healthy with no infestations of mold, fungus or other undesirables. Undoubtedly stone presses since the leaves easily can be pried off effortlessly. 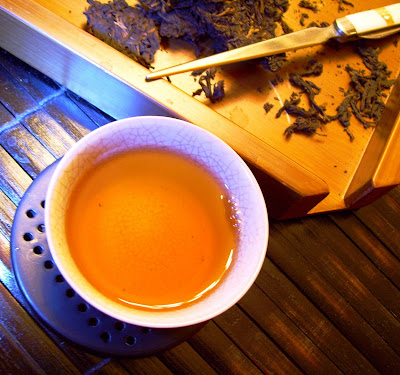 The aroma had a nice woody fragrance which was coupled with leather, tobacco and cocoa' all of which were warm, toasty and inviting. However, after the 4th infusion, almost without warning the liquor started to reveal floral notes and camphor, definitely and interesting transition. In the latter infusions, the sweet notes had succumbed to very dry notes which consisted of hay and dried grass.

The notes were quite pleasing. It was expected that the woody character of the pu-erh would carry into the liquor; however it was not as intense as it was in the aroma - It had a soothing character of which I enjoyed. After the second infusion, the liquor acquired a spicy character which was accented with delicate notes of dried plums.

For the most part, the liqour was very consistent. Although I was expecting more matured notes as a result of its accelerated aging. However, to my surprise there was still a greenness to the liquor which made it very refreshing.

It had an impeccable acidity that kept things very active and complimented the huigan quite well. Furthrmore, the thickness of the liquor provided a wonderful oomph which made the flavors linger in the palate-certainly desirable. The clarity of the liquor only added to the pleasure of the brewing session. Nice! 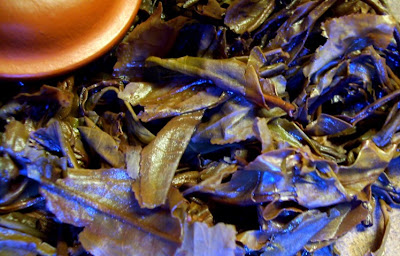 I really enjoyed this example. I believe that it still has some developing which will come with further aging, it is certainly off to a great start. I would label the tea very balanced and a tantalizing brew. When the session ended, I was very comfortable and satisfied. Although the tea was not as nuanced as I had hoped for, or can say that this was a great tea, it was definitely not boring. It had all of the qualities I would expect from a decent brew - pleasant flavors, pleasant chayun and a warm and inviting chaqi.
at December 05, 2008 6 comments: