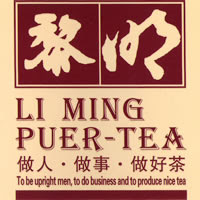 The LiMing Tea Factory is the largest state-owned pu-erh operation in Yunnan. Early in 1955, a group of 13 Army soldiers demobilized to Xishuangbanna and subsequently built the state owned factory LiMing. In 1964 Liming Factory had assembled a sterling team to start colonization of the tea production in mid-March of that year. Through savvy business sense and determination, they gradually turned the LiMing Factory into one of the largest tea factories in Yunnan. 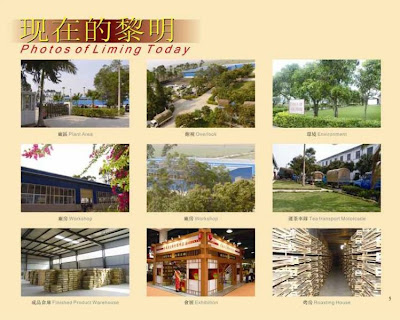 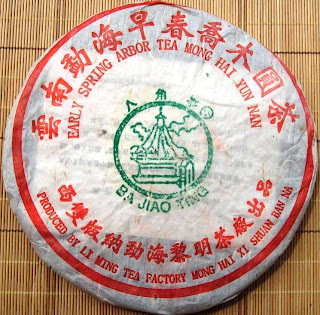 The LiMing Factory has a variety of products and one of their best sellers is the Ba Jiao Ting beeng. This particular beeng is composed of early spring arbor maocha as instructed by the cotton wrapper. The mao cha appears to be of choice and lightly pressed. According to the Yunnan Sourcing, it was stored in KuMing for a time so it has aged in a drier environment. The dry leaf had delicate notes of cocoa, tobacco, and cucumber - Clean. 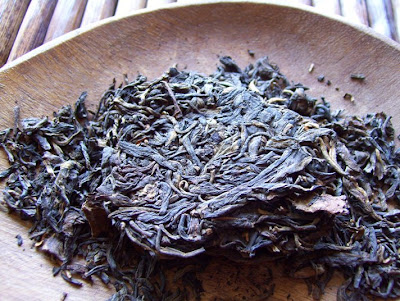 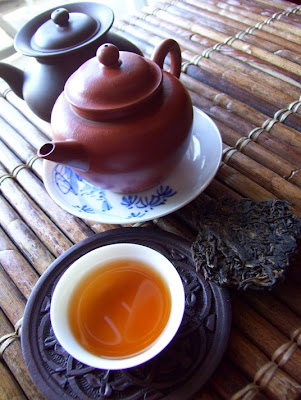 I first contemplated as to how much leaf I would use. Being that it was slightly aged, at times I ambivalent as to whether I would use less leaf or use a longer steeping time. I ultimately decided on a longer brewing time. Why was I in conflict you might ask? Well, typically as pu-erh ages, it requires more leaf to receive the optimal flavor. However, from aroma of the dry leaf, I was somewhat leary in using more leaf. The notes were dark, and as a consequence, I was uncertain as to how the infusions would react with more leaf. Furthermore, more leaf would mean that I would be drinking much more tea! Not a bad thing of course, but I don't want to drink more than I would enjoy.

The first infusion verified my assumptions. Although I do love tobacco and chocolate (which I call dark) I believe that they tend to eventually get somewhat heavy on the palate, thus potentially numbing other flavors in later infusions.

The aroma had layers of tobacco, cocoa, which subtly transformed into more fresh notes in later infusions. By the 5th infusion, the aroma had transformed more into honey, orchids, molasses.

The liquor was quite clear with an amber gloss. Although it is of 2003 vintage, the liquor appeared much more mature. The way that it had legs (vino term referring to the ability of the liquor to grab the cup)that it would have a nice viscosity. Indeed, it was nicely thick which coated my tongue and the insides of my cheeks. The first infusions were bold with and assertive bite, albeit not intimidating. It had a nice acidity which had seemed to have cleansed my palate with each each cup preparing my mouth for the next.

Their were notes of leather, tobacco, melon, honey, pine and chocolate which varied in intensity as the sessions progressed. This pu-erh somewhat surprised me in that I was prepared myself for a liquor that was a bit more matured. However, the adolescence of this pu-erh was quite bold with a nice oomph; definitely something worth storing. The throat feel was soothing but very active. However, I do not believe it was old growth as the sensations in my throat were not indicative of old growth. I could be wrong of course. The chaqi was quite soothing which seemed to be concentrated in the forehead area. 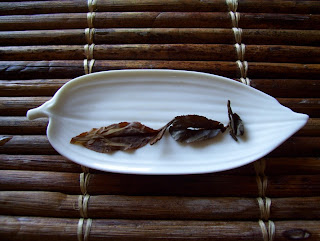 This beeng was not conventional to say the least. When I think of MengHai material, I tend to think more stability in terms of flavors. However, the palate was quite colorful. They were bright and separated. Having been stored in KunMing for 7 years, I was somewhat taken back that it was still quite assertive. Although not unusual for a 7 year, but unusual in the sense that the color was much deeper. ** Correction, Scott of YS has just informed me that the beeng was actually stored in Xishaungbanna before he acquired it this year. This of course explains its darker color.** All in all, it was an average tea which will undoubtably become much better with age.
at October 07, 2008 4 comments: