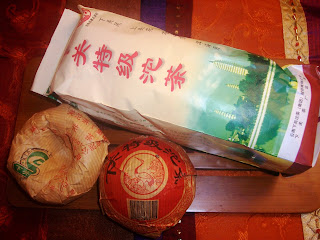 This is the 2004 "Te Ji" (Superior Grade) toucha from Xia Guan Tea Factory which was noted in the "First Steps to Chinese Pu-erh Tea" as being a notiable choice for collectors. Previously, the Xia Guan Factory had considered a the "Jia Ji" toucha as its higher grade leaf blend. However, the "Te Ji" toucha is now designated as its factory's flagship toucha offering. 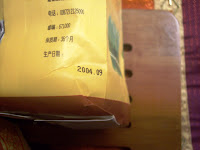 The Xia Guan Factory first introduced the "Te Ji" or Best Grade Tuo (Bird's Nest) Cha in 2003. However, the 2004 is the first series of Xia Guan products to have incorporated on its bag antifraud micro-print with the words "Xia Guan" in an effort to frustrate would-be counterfeiters. 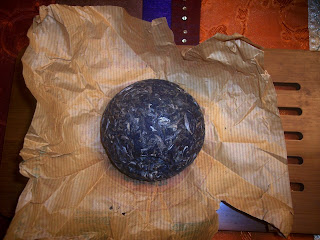 My first initial impression was that it was going to be a smoky brew when the first waves of its pungent smoky aroma had registered. It had seemed that it had not mellowed with almost 3 years of aging. The leaves were nice and tight, with silvery buds intermingling with the green pu-erh leaves. It looked typical for a toucha. Unfortunatly, with very little signs of aging. 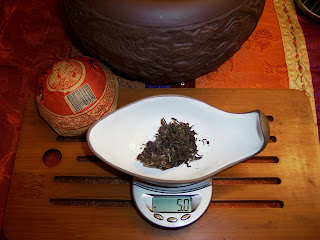 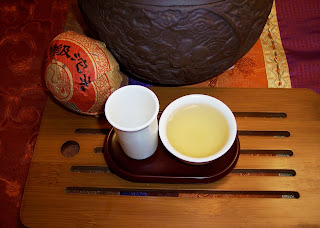 First Infusion - Smoky yet floral with an undertone of rubber as it cooled.

Taste - Slighlty bitter, however not as bitter as I thought it would be for being so young; nutty with a lasting finish. 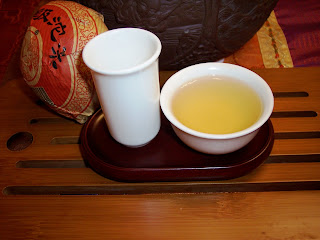 Aroma - Smoke and rubber has waned some; floral notes are now more pronounced.

Taste - Bitter on the back of the tongue; still playfully nutty with rubber notes comming through. 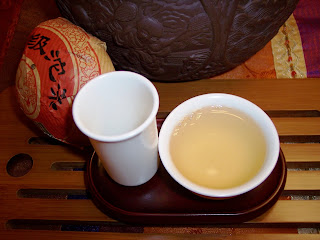 Taste - Wow, more rubber, wasn't expecting that since its not as noticeable in the aroma! Taste is very thick and lingering; floral notes are now mostly cascading in to rubber tones, but marrying well with the "tea" notes. 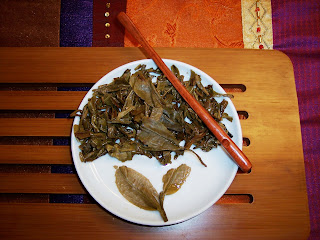 Nice looking leaves which I would expect from a Te Ji label. Very nice and healthy plantation leaves.

Its aging potential is not in question. However, from my initial inspection, the toucha did not look much different that others which I have of newer vintage. My assumptions were proven incorrect with the first taste. At first I assumed that the smoke would permeate the entire session, but to my suprise it was not a factor. Furthermore, the liquor was a deeper golden hue than that of a newer pu-erh which is also indicative of some aging. In opinion still too young to drink and to recieve any substantial pleasure. However, with the notes that I had tasted, it was a great investment and will age nicely. I believe they will compete very well with other touchas on the market today that cost more. Good find!
at February 17, 2007

I like the way you go into a lot of detail for 3 infusions and then stop.

Aren't some young greens easier to drink than this one? I've only tried a few so far, but I've enjoyed them even though they're very young. Do you think that the smoke and rubber and astringency are current difficulties that bode well for the tea's aging potential?

How did you break up the tuocha?

That might make a nice future post. How do you break into those round, smaller nuggests. Looks like you got some very attractive large leaves out of it, so your technique must be pretty good.

Hi Salsero, thank you for the kuddos! As for your questions about rubber, smoke and aging - Well, it is true that many young pu-erhs have a smoky smell and flavor, athough there are many ultra premium pu-erhs that do not. For instance, the Yan Ching Hao brand which I have tasted have virtually no smoke and taste more like a a well made oolong even at one or two years of age. As for astringency, you want some astringency in a young pu-erh. This is a good indicator that it will age nicely. However, it has to be a good astringency meaning that it is not accompanied with other over-powering tastes such as swamp or mustiness. Trust me, you will know. Remember, something that taste REALLY bad when it is young usually means that it will taste bad when it ages. I use the term usually loosely as I have been suprised. This is not to suggest that pu-erh will not mellow with age in fact all pu-erhs' will benefit from agin.


For breaking up touchas or my pu-erhs for that matter I use my knife. In a toucha, I look for weaknesses in the structure and then start from there. For instance, If I see a crack or a crevice, I start picking from there, slowly and methodically prying away until it get a sufficient size to cut off.

I hope this helps!