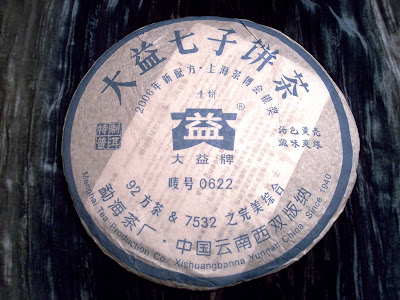 MengHai Factory DaYi Brand has introduced a new recipe for 2006 - the 0622. This MengHai product is quite unique in that it's an amalgamation of two very popular pu-erh recipes, the 92 Fang Cha (Brick Tea) and the 7532.

After winning second prize and the silver medal at the 13th annual Shanghai National Tea Culture Competition it has found favor within the pu-erh community. As a result, collectors and drinkers alike are speculating that prices for the 0622 will soar in the near future. 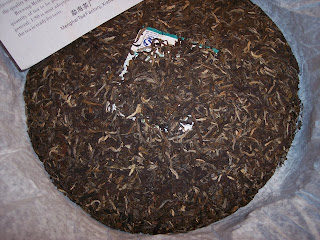 The 0622 is said to be made according to to the traditional method consisting of drying, kneading, steaming and its subsquent molding.

The mao cha is the correct size; thin and tiny. There is no doubt that the recipe is made of a second grade leaf blend. It has a nice active and clean scent; slightly floral with just a faint hint of smoke which is barely noticable. The beeng's compaction is not as hard as other '06 Menghai products that I have tried thus far. Although harder in the center, the edges seem to break off nicely. This brittleness will allow it to age nicely! 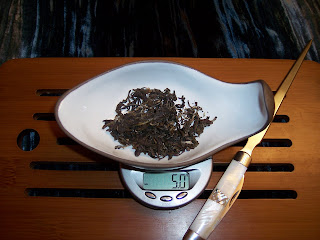 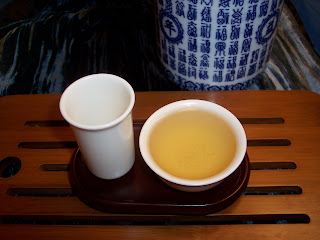 Aroma - Slightly metallic, with floral notes although not very lingering.

Taste - Young assertiveness is present, slightly bitter. Hard to separate flavors. Sadly to say, it is not very intriguing.

Color - Beautiful yellow hue. Crystal clear as it should be for a beeng of this caliber. 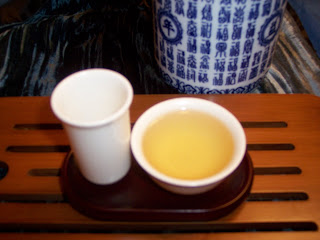 Aroma - Metallic notes have waned some. Floral notes are a bit more noticable. Has a faint fruity aroma though not very concentrated - in fact it goes as fast as it comes.

Taste - Wow! More bitterness accompanied with a slight vegetation undertone. The flavor has become a bit more thick and lingering. Not very captivating. 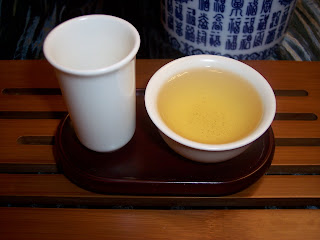 Aroma - Floral notes are now quite faint. There still seems to be a hint of an indescribable sour-fruitiness. Interesting.

Taste - The bitterness has waned considerably. Vegetation notes still noticable. Still thick and lingering, however nothing really out of the ordinary.

Color - Consistent as last with no noticable change. 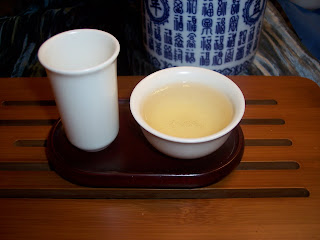 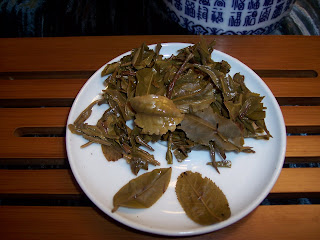 Nice plantation leaves of 2nd, and 3rd grades. As you can see they were exposed to a limited firing process as they are not very "bruised".

I was not impressed and expected more out of a silver medal winner. Although the beeng did create a clean taste and had its moments, it really lacked in oomph. Its infusions were just not very inspiring. It had a fragile aroma and its liqour was flat. I am sure that it will age nicely and gain character, however, in its present state, its a snoozer of a Gongfu session.

Prices for the 0622 are climbing and have surpassed the $16 USD that I had paid. In all honesty, your money would be better spent on something else. In my opinnion, it did not live up to the buzz at all. AM I MISSING SOMETHING!

-An imporant note- I did use a different spring water. There could be a slight chance that the the water is weak in mineral content, and it is known that soft water will create a weak liqour. If this is the case, I am quite leery that it will improve the aroma. I will brew it again with different water and post my results.

Salsero, a fellow tea enthusiast had motivated me to have a chemist friend do some analysis and evaluation on the water that I had used for this particular gongfu session. After evaluating a sample of the water, the results showed that it's mineral content was somewhat lower in content than the brand of water that I had been using on a regular basis, particularly its calcium and sodium content. Well to make a long story short, my friend readjusted the water with a bit of gypsum and sodium bicarbonate to what is comparble in in nature, and VOILA it did the trick! It REALLY made the difference. The water adjustment had brought out more flavors! The flavors are the same as they were in my review, however, they were more noticable and lasted a bit longer on the palate. The adjustment didn't help the aroma much as I had suspected. But nonetheless, it was a significant improvement - and with all pu-erhs, it will improve more with age.
at March 15, 2007

Cool blog. My dad drinks pu-ehr tea, and he's from Minnesota too! Wacky. We tease him and call it pooh-bear tea. Keep up the good work.

Hi Sally! Thanks for the kind words. Yes, pu-erh drinkers are far and few between in Minnesota BUT WE ARE HERE! Thanks for reading!

My daughter, Sally, sent the URL of your blog and I've just read a considerable portion of your posts. Very interesting. I'm just a beginner with pu-erh and have really only seriously tried the camel's breath tuocha that I get from Holy Mountain Trading. I like it very much. I'll try some of those that you recommend and see what I think. I use an Yixing pot myself but haven't tried brewing using the gongfu method. I've got a lot to try! BTW, I'm originally from Austin in southern MN but have been in NJ for the past 40 years or so.
Best regards,
Dick

Hey Dick, thanks for reading! I am happy you are enjoying what pu-erh as to offer. It is a great hobby not to mention delicious! I would really recommend the gongfu brewing method. It does make a differenc. The method can make a good tea taste great! If you any questions, don't hesitate to ask! I hope you keep reading!

Bill--
This is still a baby tea. It's a little low key (no pun intended), but I wouldn't discount it yet. The basic recipe is good and the materials are there. All it needs now is some time. The smoothness, clean finish, and mouth feel all bode well for the future; and -- after all -- it does taste nice now if you remember that it's just tea! But like you say, it will probably be more interesting in a year and then a year, etc. And you paid very little for it.

Dick, try some of the "sheng" or "raw puerh" like the one Bill reviews here. You will find them completely different from the Camel's Breath (a cooked puerh or shou).

I really appreciate your input! If fact it motivated me to have a chemist friend of mine do some analysis and evaluation on the water that I had used for this particular gongfu session. After evaluating a sample of the water, the results showed that it's mineral content was somewhat lower in content than the brand of water that I had been using on a regular basis, particularly its calcium and sodium content. Well to make a long story short, my friend readjusted the water with a bit of gypsum and sodium bicarbonate to what is considered to "normal" levels that occur in nature, and VOILA it did the trick! It REALLY made the difference. The water adjustment did bring out more flavors. Didn't help the aroma much as I had suspected, but nonetheless it was a significant improvement. The flavor were clean and smooth but still not the hair raising tastes which I have recieved from others. Of course it will be interesting to see how it ages. I do agree with you that it is still a young beeng and that I shouldn't discredit it just yet - of which I haven't, thanks to your advice and my subsequent water detective work! However, it is still my contention that current prices for the 0622 are way off base for what this beeng has to offer. I still suggest that people would be better off in buying something else. MengHai,the Bowin Corporation, and tea merchants are really uping their prices, simply because they can! They know they have a secure folling. IMHO there are other small factories in Yunnan that can make just as great of a pu-erh cake as the famous 4, but if course they are out gunned by these giants. An example of a small factory that have access to the same pu-erh materials as the MengHai Factory is the Nanqiao Factory.

Fascinating. Maybe they could start including a chemist with every tea cake!!

I have to agree with you that the prices of these better known factories have probably gone up more than is justified by the tea alone. But if you look at some of the 2007 green teas coming out this month, young puer is a low cost product. Of course, you have to invest a lot of time in the puer and the greens will be worthless in two years, so it's hardly an apples to apples comparison.

Thanks for the tip on the Nanqiao factory. I will keep my eyes open for them.

Here's another pu'erh drinking Minnesotan! I live near Burnsville and just starting drinking Pu'erh a couple months ago. With Bill's help, I've learned quite a bit.

I bought a 2006 Menghai 0622 batch 601 that weighs 660gms. I didn't want to break the seal to try a sample cos it is still pretty young. Is there any difference in material used compare to the 357gms cake you reviewed? Any info is appreciated.

You take really good pictures on the tea you reviewed. I like the shadow casted over them. Give that serene feeling which should accompany a good drinking session.

No need to worry! Although I have not ran into a 660gm that is manafactured by Dayi I am sure that the beengs are all made of the same blend and harvests. Thank you for reading! p.s. thanks for the kind comments about my photos! It was a trick that I learned from VL and Hobbes ;)