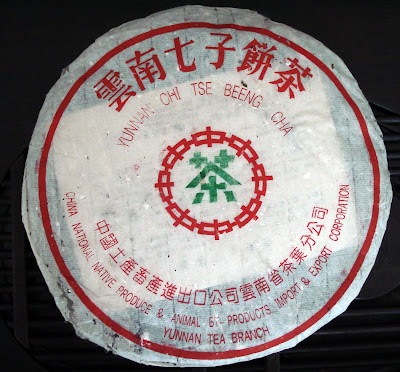 The 7542 recipe is a classic CNNP recipe which was first used in 1975. For those of you have not taken the time to inform yourselves on how to read a factory code, it is quite simple. The first two numbers represent the year that the recipe was developed, the 3rd number is the grade of leaves that were used and the last number represents the origin of factory. Lastly, the number 2 represents which factory had produced it. This coding system was instilled after the the China Tea Corporation had transferred its pu-erh manufacturing oversight to the China National Native Produce & Animal By-products Import & Export Corporation, or its more widely used abbreviation the CNNP. 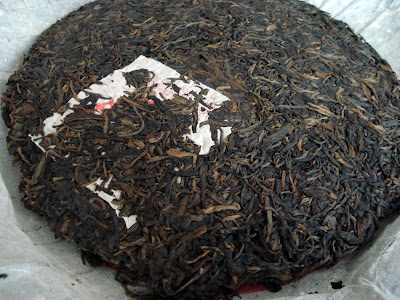 Under the auspicious of the CNNP, state manufactured pu-erh went through a couple of Small, although significant changes to the pu-erh collecting world. No longer were cakes labelled as "Round Tea Cakes", but henceforth, all state produced pu-erh cakes were to be called Seven Son Tea Cakes. Secondly, the inner description ticket was also introduced at this time. The Seven Son Tea Cake would undoubtedly make its mark in pu-erh history which of course is still being written today.

The dry leaf had virtually no wet-stored aroma. In fact, it was very difficult to acquire any notes at all. Not a problem of course. The leaves do correspond to the grade in the recipe with nice golden buds sprinkled on the surface. I saw no visual indications that the beeng was stored improperly - no frost, and no leaf deterioration . The leaves were loosely compacted which could easily be pried off effortlessly.

This beeng is from a new pu-erh store on Ebay - Sampan Tea. I have gotten to know Eloi, the proprietor, through a series of emails, and fortunately have been able to taste a few of his teas!

Interestingly, Eloi is based out of Montreal where he is a professional brewer at a local micro-brewery called "Le Cheval Blanc". His love of food chemistry had inadvertently introduced him to the world of pu-erh in 2003. Since his introduction to pu-erh, he has been on a quest for the perfect. His journey has led him live in China where he has had the privilege of drinking, sampling, visiting tea farms and researching tea with other fellow tea enthusiast of which were more than happy to share their own passion, and most importantly, there knowledge. Eloi has continued his tea relationships which have grown his personal knowledge and love exponentially. It is this passion for leaf that has driven him to start Sampan Tea. I wish him luck! 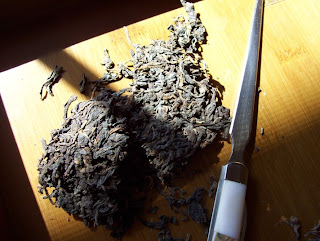 The aroma was quite nice. The first infusions were very much fresh with notes of caramelized honey, slight hints of musk and raw flour dough. No dampness or mustiness were present. The initial notes seemed to be in equal harmony with no one particular note overpowering the other. In the later infusions the aroma notes subtly became more organic where notes of wood, hay and earth had become the theme. 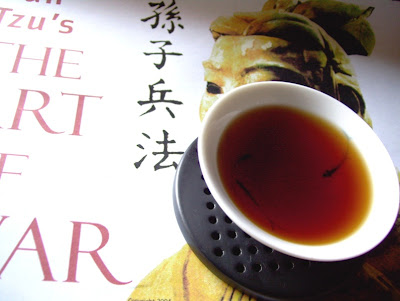 The liquor was woody, albeit not overpowering. There were notes of toasted grain which seemed to give the liquor a nice meaty quality. Additionally, it was totally absent of bitterness and was quite mellow with a decent huigan. The flavors were still very noticeable after the swallow with a finish that did not get heavy on the palate. Even after the 7th infusion the color was still wonderfully dark and rich - of course a good sign of quality. I could of received more than 12 infusions, but being the 12th round alone, I was starting to get a little full. There was really no transformation or nuances to speak of. In fact, it the flavor was quite consistent. This is certainly not a bad thing. The liquor had a nice silky feeling that coated the throat and tongue nicely. As for the Chaqi, I had become very comfortable and very relaxed. 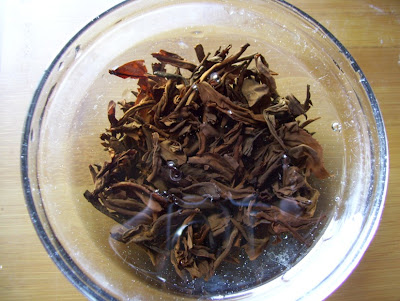 Looks like big factory fare which correspond to the recipe leaf grade.

The tea was indicative of MengHai. It was a decent and clean brew and very much on par with other similar beengs that I have tasted.
\
I initially believed that the beeng has acquired some wet storage, which I am still leaning towards due to its lack of complexity. However, after examining the leaves, I am somewhat ambivalent towards this conclusion. On one hand, its lack of palate development does in fact lead me to believe that it did acquire at some point some wet storage condition. However, when examining the spent leaves they look very consistent in what you would find with a dried stored product.

I do not want to give you the impression that it is a bad tea. In fact, I enjoyed it very much and is possibly a good representation of this era. I am just trying to speculate on its history as all collectors should do. As for my conclusions, I believe that this beeng indeed was wet stored. However, it was only for a brief period, and then, masterfully and artfully allowed to dry thoroughly in dry storage conditions. If it makes you feel more comfortable to think of wet-storage as "Hong Kong Storage" then perhaps we should call it that. Many beengs from Hong Kong are ripen much faster than those stored than let's say KunMing. Nevertheless, I assume this beeng was stored in a wetter climate for a period.

This beeng was delightful to drink. This example highlights why people starting off on their collecting venture should stock up on the time honored recipes.

The idea of dry vs. wet storage is an academic discussion that I wish not to get into on this post. However, wet stored beengs are not bad at all and it is tragic that many novices are way too fast to discredit them as a consequence of their misinformation. I have not encountered a vendor that does not have "some" wet stored pu-erh in their stock. In fact, some of the most prized beengs that are being sold which I have had the privledge of tasting have at one time wet stored. Yes, and they are being sold from VERY reputable vendors, and why shouldn't they! Chances are that if you purchase an older beeng especially from the Hong Kong area, it has gone through some wet storage. Simply stated, WET STORED IS NOT BAD!
at August 17, 2008

I have had a sample of the 1996 which I got from GrandTea soon after I started drinking puerh. At that time I tasted some, labeled the sample bag bad tea and it went to the bottom of a samples box. A couple months ago I found it again, and then -- with some experience under by belt -- I realized it was actually pretty good tea, not bad at all. I am not convinced it is the gold standard some people call it, but I did buy a whole bing of the 2005 to put down.

That is great Sal. Isn't funny how your taste change when you gain some appreciation. I think you will do well to lay as many MengHai's classic recipes as you can.

Are there certain recipes that are classic? Or do you mean just any Menghai product?

Sal, good question. Well, I am actually referring to the classic recipes from the 3 of the big factories - MengHai, XiaGuan and Haiwan. However, many other factories have tried to emulate those recipes with their own version. Be careful if you wish to venture into clones.

Thanks Stephen! Thank you fro visiting. I should have another review up shortly.

I think you mean "auspices", not "auspicious".

Maybe he means "under the auspicious eye..." sort of tongue in cheek. But all kidding aside, (I've noticed tea bloggers don't kid except for Toki), this was a most educational post. Thanks for including your tea steeping times as well and thanks for your nicely designed, entertaining and always educational blog. Eileen

Bill,
I'm Y.T. from Hong Kong.
It is a great blog with interesting video showing how to make a tea cake. I followed my father's habbit to drink pu erh for many years, but never saw how a tea cake is made.
My father operated 4 Chines restaurants in Hong Kong after World War II. He purchased many pu erh tea cakes for his restaurants every year. Not until he passed away in 1976, we found in the warehouse that there some pu erh tea cakes which were made before Wordl War II. I am not interested in restaurant business, but I am selling pu erh tea cakes.

Hello! Wow, that is like finding a buried treasure! Any interesting products that you found?