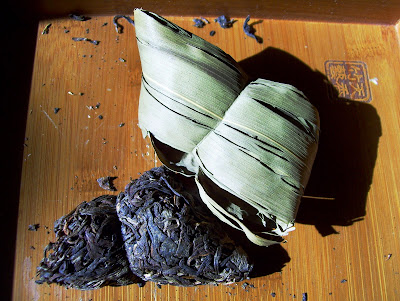 I received this interesting offering courtesy of the Puerh Shop . According to Jim, the nugget was produced by the Chinese minority that live on YouLe mountain - part of the Famous Six Tea Mountains.

I am personally not as acquainted with unadulterated Youle maocha as I would like. When I have tried it, the maocha is generally a blend of different growing areas. 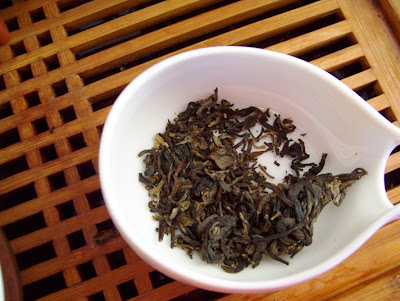 The tea was not that remarkable. It has what appear to be plantation growth fare which had a very light compaction. I did find unwrapping the bamboo a nice change of pace. The maocha doesn't really have much of a odor - no smoke, no greenness, nothing really. In fact, it was difficult for me to detect any. The odor I was able to be alerted to was difficult for me to discern whether it was a result of the bamboo leaf or the maocha.

The aroma was not what I would expect. It really smelled like a roasted oolong type tea. In fact, I would say it smelled somewhat like Tiequanyin. The first infusion and second infusion were the best, and simply waned from there - very quaint to say the least. There were notes of roasted tea, melon and fresh grass which were for the most part very consistent. 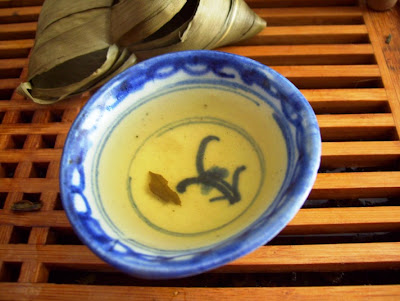 As for the liquor itself, it was subtle yet not displeasing. Very light roasted tea flavor, with no bitterness and virtually no acidity. Despite its lack of development, it did have a charming Huigan. It had a wonderful color and clarity, something that I did not expect. 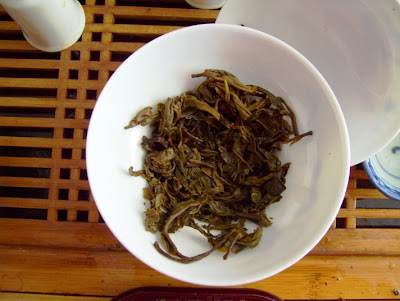 As stated previously, the maocha was unremarkable. The unfurled leaves remind me of green tea and pu-erh. Nice color.

Well, definitely not something for aging. In fact, it is quite enjoyable now. It is a wonderful novelty which will certainly entertain a few. Frankly, the price is nice and it didn't really offend and somewhat amuzing. I would even recommend it to non-puerh drinkers as a green tea. :P
at March 17, 2009

Great stuff, as always. This one looks very much like the same that was being sold by Nada for a while. Did you try that one for comparison?

Actually, I have not tried Nada's bamboo nugget. Although, I did read your post and it seems quite the contrast.

Hi there! I've been lurking around your blog for a short while now, and I'm generally amazed at the willingness with which you indulge in and appreciate young raw pu-erh. While I do gather new releases as they come into market, my tastings go no further than the shop stage in order to assess their potential for aging. It's almost never that I would sit down to a session of young sheng, unless something really notable has come along, like single tree wild leaf tea.

You have my admiration and respect.

First and foremost, thank you very much for your kind words. Makes blogging all the worth while.

I do love to drink sheng on occasion. I believe some sheng is more well suited for drinking while young than others. Like you, I generally purchase young sheng for aging. However, on occasion, I find the youthfulness of a sheng excelerating! After all, at is core, it is just green tea. I thank you for reading and good luck Pein.